Want to take our ties with India to higher level: Lankan Prez Rajapaksa

The newly elected president said that Colombo and New Delhi need to 'work together' for economic development and security of their people. 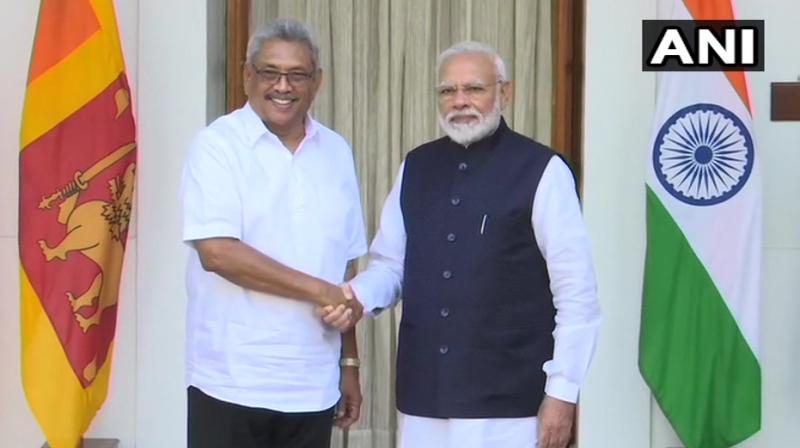 Upon his arrival at Rashtrapati Bhawan, Rajapaksa was received by President Ram Nath Kovind and Prime Minister Narendra Modi and was accorded a ceremonial reception (Photo: ANII)

New Delhi: Asserting that India and Sri Lanka have a "long-standing friendship", the island nation President Gotabaya Rajapaksa on Friday said that he would take the bilateral relationship to a "higher level".

In his first comment to media after arriving here on Thursday, the newly elected president said that Colombo and New Delhi need to "work together" for economic development and security of their people.

"It is my first overseas visit after assuming duties as a president of Sri Lanka. I want to express my gratitude to the India government to the President and the Prime Minister," Rajapaksa said.

"My expectations are very high. As my tenure as the President, I want to take the relationship between Sri Lanka and India to a higher level. We have of course long-standing friendship--historically culturally and politically. We need to work together for economic development and security of our people," he added.

Upon his arrival at Rashtrapati Bhawan, Rajapaksa was received by President Ram Nath Kovind and Prime Minister Narendra Modi and was accorded a ceremonial reception

Both leaders are likely to discuss areas of cooperation and ways to strengthen the existing bilateral relations between the two countries. After holding talks at the Hyderabad House, both leaders will issue a joint statement.

He is slated to attend a programme in the city on Saturday. Later in the evening, Rajapaksa would emplane for Sri Lanka.

The Ministry of External Affairs (MEA), in a statement, had said that the Indian government is ready to work very closely with the new government in Sri Lanka and expressed hope that it will fulfil the aspirations of the Tamil community living in the island nation.

70-year-old Rajapaksa had defeated United National Party (UNP) candidate Sajith Premadasa by more than 13 lakh votes in the recently-concluded presidential elections in Sri Lanka. He is the second member of the Rajapaksa family to become the president.