SC was told that there was no basis for CVC to pass such an order recommending to send Alok Verma on leave. 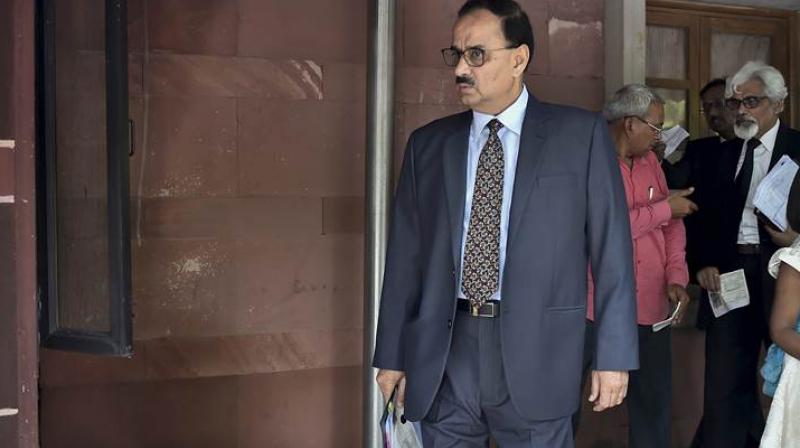 Challenging government's decision, senior advocate Fali S Nariman said Alok Verma was appointed on February 1, 2017 and 'the position of law is that there will be a fixed tenure of two years and this gentleman cannot be even transferred'. (Photo: File | PTI)

New Delhi: CBI Director Alok Verma, who has been divested of all duties by the Centre and sent on leave, told the Supreme Court on Thursday that he was appointed for a fixed tenure of two years and cannot be transferred.

Challenging the government's decision, his counsel and senior advocate Fali S Nariman said Verma was appointed on February 1, 2017 and "the position of law is that there will be a fixed tenure of two years and this gentleman cannot be even transferred".

Making his submission before a bench comprising Chief Justice Ranjan Gogoi, Justices S K Kaul and K M Joseph, the advocate said there was no basis for the Central Vigilance Commission (CVC) to pass such an order recommending to send him on leave.

"There has to be strict interpretation of the Vineet Narain judgment. This is not the transfer and Verma has been denuded of his power and duties...otherwise there was no use of the Narain judgement and the law...," Nariman said.

The Vineet Narain decision, delivered by the apex court in 1997, relates to the investigation of allegations of corruption against high-ranking public officials in India.

Before 1997, the tenure of the CBI director was not fixed and they could be removed by the government in any manner. But the apex court in the Vineet Narain judgment fixed a tenure of minimum of two years for the CBI director to allow the officer to work with independence.

Nariman referred to the terms and conditions of appointment and removal of the CBI director and concerned provisions of the Delhi Special Police Establishment (DSPE) Act, 1946.

At the outset, Nariman told the bench, which on November 20 had expressed deep anguish over the purported leak of CBI Director's response to the CVC's findings against him, that the court cannot prohibit the publication of the content of the petition as Article 19 of the Constitution is paramount.

He also referred to the apex court 2012 judgement in a case on the issue.

The bench was irked over the publication of allegations levelled by agency's DIG Manoj Kumar Sinha in a separate plea.

The senior lawyer said, "If I file something tomorrow in the Registry then it can be published."

He added that if the apex court later prohibits then the matter cannot be published. When Nariman suggested the apex court to mould a rule to postpone media reporting in some cases of scandalous allegations, senior advocate Rajeev Dhawan, appearing for CBI Deputy SP A K Bassi, the former probe officer of the bribery case against the Special Director CBI Rakesh Asthana, said he has serious reservations about his advice.

The CJI, however, said the court does not intend to pass any orders.

Dhawan said, "It is unfortunate that last time you said that none of us deserve to be heard" The CJI said, "Unfortunate it may be, but we will hear you today". The hearing is underway.