Singapore minister has a ride on Tejas, calls LCA ‘excellent’ 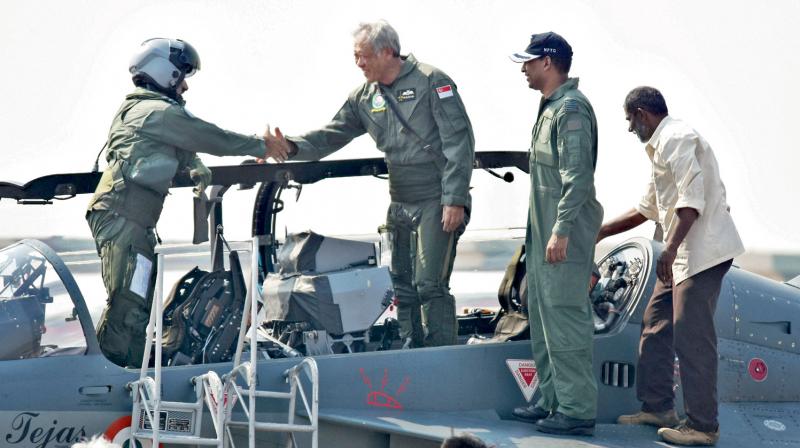 Singapore defence minister Ng Eng Hen shakes hands after a sortie in the trainer version of the Tejas light combat aircraft (LCA) at the Kalaikunda IAF base in West Bengal on Tuesday. Air Vice Marshal A.P. Singh was the pilot who flew the visiting dignitary in the LCA. (Photo: PTI)

According to him, Tejas is also a “very capable aircraft”. Sharing his flying experience of around 45 minutes, at a height of 20,000 ft above the Kalaikunda Air Force station, in West Midnapore of West Bengal, he showered lavish praise on Indian Air Force (IAF) — Air-vice Marshal A.P. Singh, project director at the National Flight Test Centre of the Aeronautical Development Agency.

The meeting between the two has been scheduled today.

Accompanied by senior officials, Dr Hen on Tuesday, visited the Kalaikunda airbase where a contingent of Republic of Singapore Air Force (RSAF) with fighter aircrafts including F-16s is taking part in the routine annual joint military training with the Indian Air Force.

He also interacted with the members of the contingent.

Mr Hen said, “It was an excellent and impressive experience. That is the reason why our air force gets trained by the IAF. The pilots are superb. The aircrafts are pretty good. We earn measurable value in the training with the IAF.”

He also tweeted: “Privileged to be flown on the #Tejas, India’s own designed and manufactured fighter aircraft. A very good plane. #fighteraircraft @IAF_MCC.”

Asked if Singapore eyes to buy Tejas, Mr Hen did not rule out the possibilit.

However, he said, “Our bilateral ties is very strong. It is going stronger. I am scheduled for the dialogue with Ms Sitharaman. Tejas is a very capable aircraft. I am not a pilot who can speak about it. Honestly speaking the flying experience was liking riding in a car.”

A senior official of Defence Research and Development Organisation indicated on anonymity that the three Tejas aircrafts were flown into the training excercise allow Mr Hen to have a first-hand experience as Singapore has shown signs of a potential buyer among some other nations recently.