India   All India  29 Oct 2021  Aryan Khan set to be out of jail today; Juhi Chawla stands surety
India, All India

Aryan Khan set to be out of jail today; Juhi Chawla stands surety

Accused will not undertake any action which is prejudicial to the proceedings before the special trial court, the bail order said 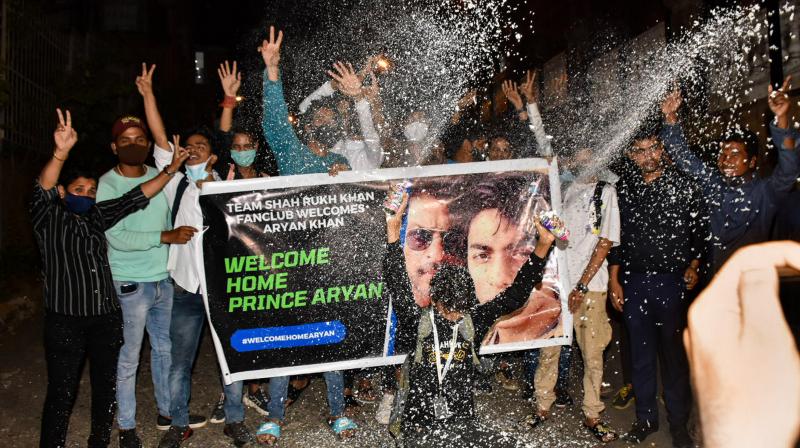 Mumbai: Bollywood mega star Shah Rukh Khan's son Aryan had to spend one more night at the Arthur Road jail, as his release order could not be submitted to the jail till 5.30pm on Friday. With actress Juhi Chawla standing surety for Aryan, all the procedures to release him were completed by the evening at the special NDPS court but the order could not reach the jail. Aryan is expected to get released from the jail Saturday morning.

While granting him bail, the high court has set stiff bail conditions. The high court has said that Aryan will have to inform the investigating officer and give his full itinerary to him if he wants to leave Mumbai. He will also have to submit his passport and he will not be allowed to leave the country without the permission of the NDPS court.

The court on Thursday granted bail to Aryan, Arbaaz Merchant and Munmun Dhamecha. The trio are expected to be released on bail on Saturday.

Aryan's legal team had placed teams of junior lawyers at important places like outside the chamber of the high court judge to receive a copy of the signed bail order, another team was present at the Sessions court ready with required documents so that the procedure there could be completed without wasting any time. Even actress Juhi Chawla, who stays at Malabar Hill and her residence is not too far from the court, reached the court on time to stand surety for Aryan.

The team of lawyers at the HC rushed to the Sessions court as soon as they received the copy of the order. The lawyers at Sessions court furnished the order copy before special NDPS court judge V.V. Patil. The court accepted Juhi Chawla as surety for Aryan l. Following this, the lawyers rushed to the registry to pay the cash amount for bail and complete further formalities. But the procedure could not be completed and release order could not be submitted to the Arthur Road jail in time.

The jails have put up drop boxes outside jails and bail orders are supposed to be dropped inside the box latest by 5.30pm and Aryan and his co-accused Arbaaz's bail order could not be dropped into the box by 5.30pm thus they would now be released on Saturday morning. Munmun Dhamecha is lodged at Byculla women prison and she too is expected to be released on Saturday.

After completing surety procedures, some of the court staff took selfies with Juhi Chawla. After coming out from the court, she told media that the main thing is, "ab bas bachcha ghar aajayega" (now the child will return home).

While granting bail to Aryan and two others, Justice Nitin Sambre has put fourteen conditions. These conditions include furnishing of Rs 1 lakh with surety of the same amount. They have been directed not to indulge in activities similar to the one for which they have been arrested. They shall not try to establish communication with co-accused or any other person involved directly or indirectly in similar activities or make any call to any person indulging in similar activities as alleged against them, through any mode of communication.

Accused will not undertake any action which is prejudicial to the proceedings before the special trial court, the bail order said. Accused neither personally nor through anyone make any attempt to influence witnesses nor tamper with the evidence, it added.

The accused have been asked to surrender their passport and not to leave India without prior permission from the special court. Even if they want to go out of Mumbai they shall inform and give their itinerary to the investigating officer.

The accused have been asked not to speak to the media about the case and attend the NCB office every Friday. They have been asked to join the investigation as and when called upon by the NCB authorities and not to skip attending court hearings without any reasonable cause. If the accused violate any of the bail conditions the NCB is entitled to approach the court for cancellation of bail.