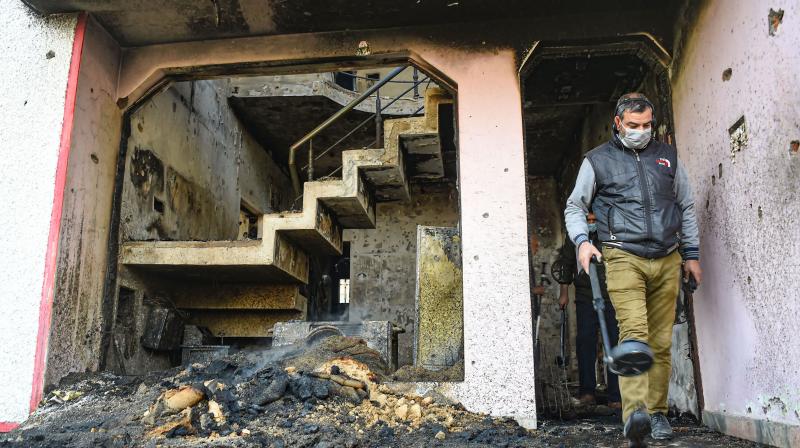 A member of the bomb disposal squad of Jammu & Kashmir police searches for an explosive material inside a damaged house after an encounter between security forces and militants, at Mouchwa on the outskirts of Srinagar, Wednesday, Oct. 28, 2020. Two militants were killed in the gunfight. (PTI)

Srinagar: Two Jaish-e-Muhammad militants were killed in a gunfight with security forces in Mochu area on the outskirts of Jammu and Kashmir’s summer capital Srinagar overnight, the officials said on Wednesday.

The slain militants have been identified as Javaid Ahmad Ganaie, a resident of southern Pulwama district and his Pakistani associate  Khalid alias Ilyas. The J&K police in a statement said that the duo was given the opportunity to surrender. “However, they  fired indiscriminately upon the joint search party which was retaliated leading to an encounter,” it said.

IGP (Kashmir) Vijay Kumar told reporters here that, so far, this year eight militants have  surrendered during “live encounters” across the Valley of which five surrenders took place in the October alone.

"This year, so far, eight surrenders took place in live encounters in the Valley of which five militants surrendered in the month of October alone. It is a welcome development,” he said.

Meanwhile, one soldier each from the Army and the BSF were injured in a mine blast at a forward area along Line of Control (LoC) in Balakote sector in J&K’s Poonch district on Wednesday afternoon.

The officials said that two jawans —  Inayat Hussain of BSF’s 59th Battalion attached with Army’s 14 Punjab and  Sahil Kumar of Army’s 14 Punjab - were injured in a mine blast in Manjakote area of the Balakote sector.  They were immediately evacuated to a government hospital in neighbouring Rajouri town where from the Army soldier was shifted to a military hospital in garrison town of Udhampur.