The attitudes of young Indians are in some ways inspiring. They want a shift to a cleaner, more meritocratic kind of politics. 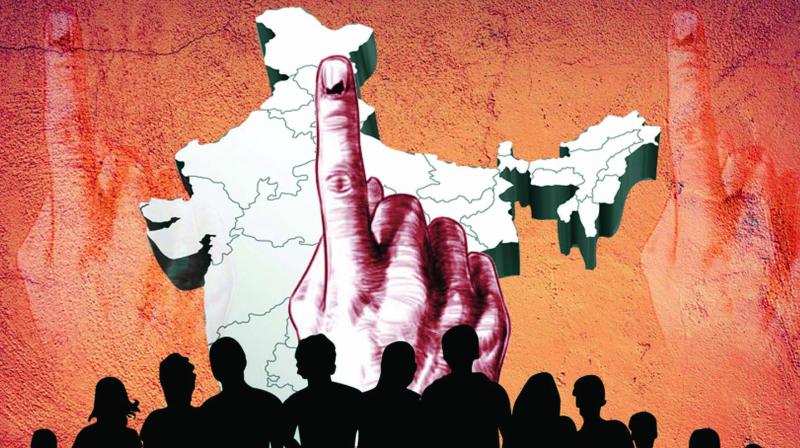 The youth could be a ‘demographic dividend’, ensuring stability and prosperity for the decades to come. India’s leaders are old and no longer represent the people.

The majority of the Indian democracy is made up of people below the age of 40. Still, whom do we elect? A majority of people above the age of 60! Even madness has a method, does it not? Politicians, however, begin their careers when other professionals retire. Why, then, are people below 50 considered juveniles in the political arena? The country desperately needs young leaders who are energetic, enthusiastic, innovative, skillful, morally sound, ethically upright and of course, diligent.

Many top political leaders in India struggle with ill health but may not admit to their illness in public. Health problems occur mainly because of sedentary lifestyles and are often a byproduct of affluence. India is a nation that that has historically been more passionate about food than fitness. There is no culture of physical fitness and because of this, tend not to be very active in their old age.

If there is ‘vibrancy’ among young people, there is great anger too

In 2019, hardly 1.5 percent of the Lok Sabha MPs belong to the age group 25-30, 12 percent are between 30 and 40 and 16 percent come from the 51-55 age group. Not only is youth representation declining in Parliament, but the average age of MPs has also risen in the last 20 years. India has a fifth of the world’s youth but the young nation’s politics are depressingly feudal, ridden with dynasties and geriatric king-makers. Religion and caste continue to play a big role. Young Indians are fed up and desperate for a change.

The attitudes of young Indians are in some ways inspiring. They want a shift to a cleaner, more meritocratic kind of politics. There is a dystopian undercurrent to their views – political parties seem frozen in time, preferring to continue with their allegiance to seniority, hierarchy and in the process, old age!

The youth could be a ‘demographic dividend’, ensuring stability and prosperity for the decades to come. India’s leaders are old and no longer represent the people. The only party whose leadership seems to be getting younger is the BJP.

Gerontocracy: Politicians considered ‘young’ in India are at retirement age in other professions.

When the 77-year-old Ronald Reagan was replaced at the White House on January 20, 1989, by the 64-year-old George H.W. Bush, people joked that the United States would now have a President who could actually remember the names of those he interacted with regularly.

Barack Obama was 47 when he entered the White House and 55 when he departed. The Russian President Vladimir Putin turned 60 on October 7. German Chancellor Angela Merkel and French President Francois Hollande are both 58. The new Chancellor of Austria, Sebastian Kurz, is 31. Jacinda Ardern, Prime Minister of New Zealand, is 37. David Cameron was sworn in as Prime Minister of the United Kingdom at the age of 43.

Two-thirds of people in India lives in poverty: 68.8% of the Indian population lives on less than Rs 150/- a day - they are considered extremely poor. This makes the Indian subcontinent one of the poorest countries in the world.  Women and children, the weakest in Indian society, suffer most.

1.4 million children die each year in India before their fifth birthday. More than 200 million people don’t have sufficient access to food, including 61 million children. 7.8 million infants were found to have a birth weight of less than 2.5 kilograms. 25% of children in India have no access to education. India is at a tipping point, both in terms of economic growth and in the human development of its more than 1.2 billion citizens.

Indian state failed by its leaders

In the cities or towns, the stress is exacerbated by the failure of authorities to provide even basic public services. Power cuts are common. Potable water is rare. Food prices are rising, so are rents. Corruption is rampant. Bribes have to be paid for school and college places, to the police, to petty officials to ensure they perform basic administrative tasks, even for hospital beds. If you have connections best of all, a politician – life can be much easier.

Youth participation in politics, for now, is still dependent on wealth, legacy and connections. ‘Those in power are old people not exactly on wheelchairs but old enough!

Set aside seats in the Parliament and legislatures for the young and the youth! After all, if reservation can be provided to a range of ethnicities and caste-based groups, why not for the youth? Our political structure ideally should offer multiple avenues for political empowerment. Municipal and panchayat polls should give rise to leaders who have experience at the ground level. Such leaders, after some experience, should be able to run for state and eventually the central legislative seats. After all, this is how leaders are found in healthy democracies.

Sadly, politics today has earned a reputation for being a ‘dirty field’. In this situation, where law makers have consistently become law-breakers it’s no surprise that often law breakers qualify to become the law makers!

In a scenario where people have lost faith in their leaders, the government and in politics in general, why would an educated, right-thinking parent encourage his or her child to venture into the jungle of politics?

While we need the experience and wisdom of seasoned politicians who are now in their twilight years, the exuberance of the youth, their lateral thinking to get things done will offer a whole new perspective to the many problems that the country faces today. But unfortunately, there are only two types of youth that participate in politics today, those with dynastic back ground and those with money and muscle power!

The youth should jump into the dirt of Indian politics and manage to stay clean, and bring transparency to the system from within.  We need to develop a critical mass of young, honest and successful politicians so that they can become a motivational model for others. Youthhas to take the first step; youth have to be the lotus of Indian politics: they must remain shining despite the murky whirlpool around them.  Only then can we expect to see a change in Indian politics.

— Dr N Prabhudev is a former VC of Bangalore university