Furthermore, the $20 service charges will not be applicable to those Sikh pilgrims or tourists. 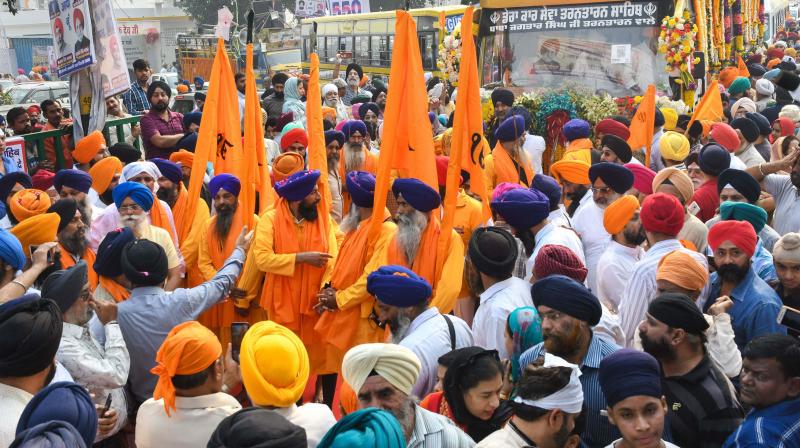 A religious procession of Sikh devotees leave from Gurdwara Nanak Piao in Delhi for Nankana Sahib in Pakistan on Monday. (Photo: PTI)

New Delhi/Islamabad: A group of Sikh devotees from India, part of a religious procession, on Monday started off their spiritual journey from Delhi to Nankana Sahib in Pakistan, the birthplace of founder of Sikhism Guru Nanak Dev, the high commission here said.

The ‘Nagar Kirtan’ (procession) is led by Sardar Paramjit Singh Sarna, the former president of the Delhi Sikh Gurdwara Management Committee (DSGMC) and includes representatives from different sections of the Sikh community in India, the Pakistan high commission said in a statement.

On Monday morning, the procession was sent off by several dignitaries, including Delhi chief minister Arvind Kejriwal, it said. Acting high commissioner of Pakistan Syed Haider Shah also attended the send-off ceremony as a special guest, the statement added.

Meanwhile, Pakistan said that pilgrims and travellers from countries other than India will get tourist visas for visiting the shrine. Foreign ministry officials said the Sikh pilgrims as tourists from countries other than India would be able to travel across Pakistan, including Gurdwara Panja Sahib in Hasan Abdal and Nankana Sahib and would not be confined to Kartarpur Sahib.

Furthermore, the $20 service charges will not be applicable to those Sikh pilgrims or tourists.

The pilgrims from India can only stay at the shrine of Baba Guru Nanak – one of Sikhism’s holiest sites in Pakistan, where Guru Nanak, the founder of Sikhism, died in the 16th Century — from dawn till dusk and are required to pay $20 per pilgrim.