India   All India  29 Oct 2018  'Genuine' devotees to get necessary aid at Sabarimala: Kerala govt to HC
India, All India

'Genuine' devotees to get necessary aid at Sabarimala: Kerala govt to HC

Kerala informed HC that necessary, requisite action would be taken to maintain law and order in Sabarimala. 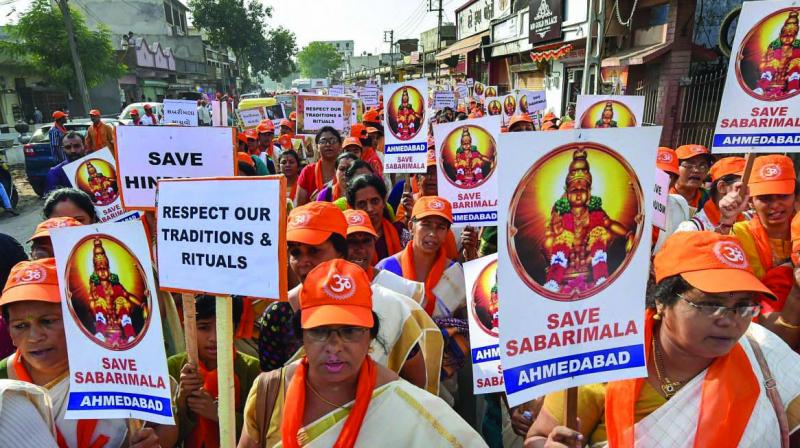 Considering another petition by a BJP functionary, Kerala HC observed Lord Ayyappa temple belonged to all and it was a shrine where devotees of all faiths could enter to offer prayers. (Photo: File | PTI)

Kochi: The Kerala government on Monday assured the High Court that every genuine devotee would be provided necessary assistance for offering prayers with sanctity and dignity at the Lord Ayyappa temple at Sabarimala.

The government stated this while the division bench, comprising Justices P R Ramachandra Menon and Devan Ramachandran was hearing a plea by four women devotees in the menstrual age group, seeking a direction to the government to provide them security to offer prayers at the temple.

The state also informed the court that necessary and requisite action would be taken to maintain law and order in Sabarimala. The court then closed the petition, saying that the apprehensions raised by the petitioners were premature and irrational.

It also expressed the hope that no untoward incidents would occur in Sabarimala, and the upcoming pilgrim season commencing next month would go on smoothly.

In their petition, the women, including two lawyers, submitted that despite the Supreme Court judgement permitting entry of all women into the hill shrine, the hopes of female devotees of Lord Ayyappa were still in limbo.

The petitioners also alleged that the tantris (priests) and the Pandalam royal family, who are bound to act under the directions of the TDB, which manages the shrine, were committing contempt of court by protesting in support of those challenging the fundamental rights declared by the apex court in favour of woman of all ages. Considering another petition by a BJP functionary, the bench observed that the Lord Ayyappa temple belonged to all and it was a shrine where devotees of all faiths could enter to offer prayers.

The bench made the observation while considering a petition by T G Mohandas, a BJP functionary, seeking to restrain non-Hindus and non-idol worshippers, in Sabarimala. It observed that the plea "will ruin the non-communal fabric texture of Sabarimala."

The court directed the state government and the Travancore Devaswom Board to file their version on the plea in two weeks.

In his petition, Mohandas said entry of non-Hindus and non-idol worshippers into Sannidhanam violates the Supreme Court verdict and rules of the Kerala Places of Public Worship (Authorisation of Entry) Act, 1965.

Considering another plea challenging the "massive" arrest of Ayyappa devotees, the bench directed the police to file a proper statement about the action taken against those identified as having taken part in the violence during the recent monthly pooja.

The court also directed police to file a proper statement on the action taken against police personnel who were allegedly involved in the "atrocities."

Petitioners Suresh Kumar and Anoj Kumar, hailing from Pathanamthitta where the hill shrine is located, alleged that even devotees who participated in the 'Nama Japa Yajnam' (chanting of Ayyappa mantras) were harassed by police.

The state police has arrested over 2,000 people in connection with the protests. Coming down on the state government for the large-scale arrest of devotees, the Kerala High Court on Friday warned that a heavy price would have to be paid if innocent people were arrested.

The temple had witnessed high drama with around a dozen women in the 10 to 50 age group being prevented from entering the temple by protesting devotees after the doors were opened for all women, following the Supreme Court verdict.

On September 28, a five-judge Constitution bench of the apex court had lifted the centuries-old ban on the entry of women of menstrual age into the shrine.