Feud in CBI raises a stink in Odisha 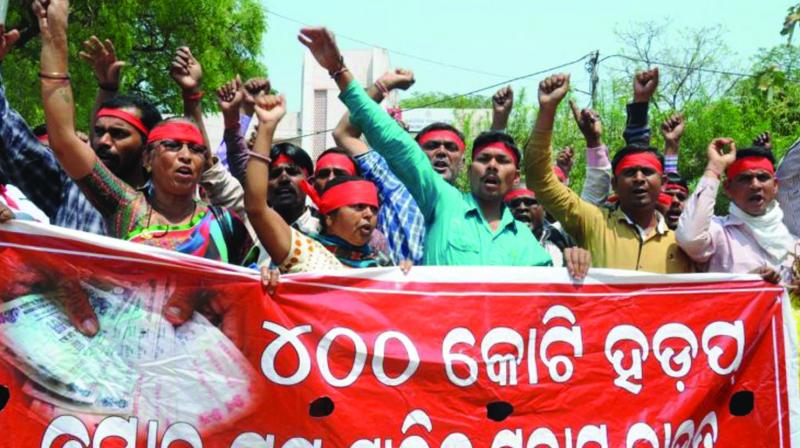 BHUBANESWAR: The ongoing fight between the top officials of the  the Central Bureau of Investigation (CBI) has prompted political leaders in Odisha to raise a finger at the country’s top investigating agency which has stopped its investigations into many scams, including the sinking of Black Rose ship, Rs 3 lakh-crore mining scam and Rs 20,000-crore chit fund scam.

Senior leaders belonging to various parties have said both Odisha chief minister Naveen Patnaik and the Union government had called on the agency not to proceed in these cases as action against the culprits would harm their political interests.

Since 2000, the CBI has taken up nearly half-a-dozen cases in Odisha. Some of the major cases include Steel Bond scam, teacher Itishree Pradhan murder case, Mahatma Gandhi National Rural Employment Guarantee Scheme (Mgnregs) scam, chit fund scam and the mysterious drowning of MV Black Rose ship. However, in none of these cases, the agency managed to bring the “real culprits” to book.

People in Odisha are in the dark about the progress of the probe into the Steel Bond and MGNREGS scams.

In the case of brutal murder of lady teacher Itishree Pradhan at Rayagada, the agency could not establish the identity of the real accused who burnt the victim alive. Surprisingly, Itishree had named many persons who were attempting to sexually exploit her.

On November 24, 2017, the CBI filed a closure notice in the Supreme Court in the Itishree Pradhan murder case, citing it could not trace out the key accused. Leaders cutting across party lines had demanded strong action against the accused in the case.

Itishree, who had informed her top bosses and chief minister Naveen Patnaik through letters about the threat to her life from influential officers and politicians, was set on fire in the night of October 27, 2013, allegedly by some persons against whom she had brought sexual harassment charges.

The teacher had even mentioned the names of some persons in her dying declaration recorded by police at a hospital in Visakhapatnam.

The CBI, which on January 20, 2015 took over the case, had examined several witnesses in the murder case.

Senior BJP leader Samir Mohanty said it was unfortunate that the CBI submitted a closure notice in the Supreme Court before reaching a conclusion.

“In the history of CBI, definitely the closure of Tikiri lady teacher murder case would be a blot. This is very unfortunate,” said Mr Mohanty.

The Congress leader Niranjan Patnaiik said, “Who killed Itishree has become a mystery after CBI’s closure report. We demand reopening of the case.”

In the multi-crore chit-fund scam, the CBI arrested a BJD Lok Sabha member Ramchandra Hansda and two of its sitting MLAs — Pravat Triapthy and Pravat Biswal and a few other leaders. However, some influential people, including a few former ministers allegedly involved in the irregularities, are yet to be brought into the ambit of investigation.

Dr Damodar Rout, a senior BJD leader who was recently sacked by the chief minister for raising a host of corruption cases,  alleged that the CBI slowed down its chit fund scam probe in Odisha as the CM paid a huge bribe of Rs 100 crore to the CBI officers.

“It is being widely discussed that Mr Patnaik paid over Rs 100 crore to the CBI officers probing the Odisha chit fund scam. Had it not been so, almost all the tainted BJD leaders would have been behind bars by now,” said Dr Rout.

According to an estimate by justice MM Das Commission, over 170 chit fund firms have cheated nearly 20 lakh poor people to the tune of Rs 10,000 crore by promising them good returns on their investment.

The worst part of the story is that when the ponzi firms were looting gullible people, a former CBI director came to Odisha after his retirement and joined an Odia daily as its editor. Another startling fact is that an incumbent CBI director then flew to Odisha to inaugurate the office building of the same newspaper. The owner of the newspaper, said to the kingpin in the chit fund scam, was later arrested. He told the interrogators that – with the support of his CBI director-turned editor – he had met many CBI officers in Delhi.

In July this year, the CBI took over the probe of mysterious sinking of Mongolian ship, MV Black Rose. The vessel carrying iron ore and some other suspicious materials sank 5 km off Paradip Port on September 9, 2009.

The Paradip Port Trust chairman Rinkesh Ray had hinted at involvement of several people in the incident.

The Black Rose vessel had come to the port with forged documents. Several agencies and people are involved in the illegal shipping, said Ray, adding, “I will cooperate with CBI in the investigation.”

Sacked BJD minister Dr Damodar Rout, while alleging that top leaders of BJD were carrying iron ore and other suspicious materials in the ship, has been demanding immediate arrest of the accused.

With Odisha cadre IAS officer M Nageshwar Rao, who was close to the BJD president Naveen Patnaik taking over as the new CBI chief,  the fate of the investigation into the MV Black Rose ship appears to be uncertain, says Dr Rout, alleging that the CBI has been sitting over the case.