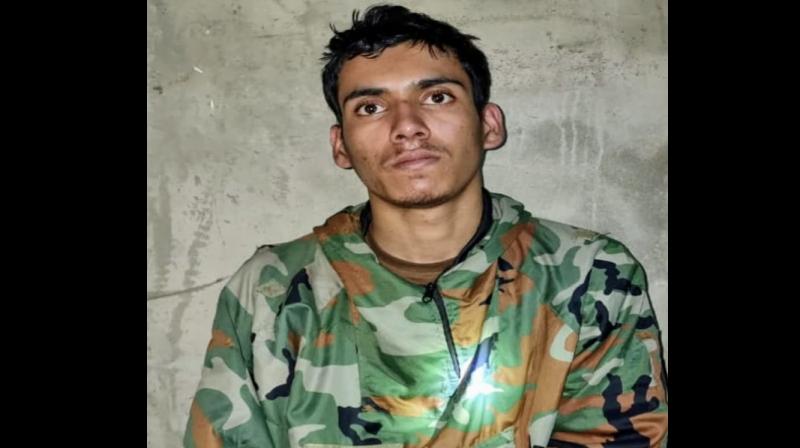 The captured militant has been identified as 19-year-old Ali Babar Patra. (By arrangement)

Srinagar: The Indian Army on Tuesday said that a Pakistani militant belonging to the banned Lashkar-e-Tayyaba (LeT) outfit had been captured alive and another killed by it while foiling yet another infiltration bid along the Line of Control in the Uri sector of J&K’s Baramulla district.

The captured militant, who is being interrogated at a military base in Uri, has been identified as 19-year-old Ali Babar Patra, a resident of Dipalpur in Okara district of Pakistan’s Punjab. The slain militant has been identified as 33-year-old Atiq-ur-Rehman, alias Qari Anas, a resident of Attock district of Pakistan’s Punjab.

The Army said that four of its soldiers were injured in the clashes with a large group of infiltrating militants. The other members of the group were forced to flee back into Pakistan-occupied Kashmir, it added.

A senior Army commander, Maj. Gen. Virendra Vats, who heads the 19 Infantry Division, told reporters in Uri that Babar Ali Patra, son of late Muhammad Lateef of Okara, has during initial questioning admitted to being a member of Lashkar and that he was given arms training at a camp near PoK capital Muzaffarabad.

“He has revealed that he went for a three-week course at a camp at Garhi Habibullah in Khyber Pakhtunkhwa province in 2019. After receiving training, he was sent home but was recalled for an important task this year. He has given the contact number of his mother, which is 03013668927,” the Army officer said.

He said Babar Ali, after his surrender, taken into custody by troops “keeping in view the ethos and value system of the Indian Army that we do not use force against any unarmed person”.

He said that as many as seven militants were killed in counter-insurgency operations in the past one week, five of them along the LoC. It is for the first time in several years that a Pakistani militant has been captured alive on the LoC by the Indian Army or any other security agency, officials said.

The Army in a statement here said the captured militant “was misguided and lured into joining LeT due to poverty (after) having lost his father early”.

It said: “His family in Dipalpur consists of his widowed mother and an adopted sister. The family belongs to the lower class, barely managing to make both ends meet. To escape poverty, the individual left schooling from a government-run institution after Class 7. He had three weeks of preliminary training at the Garhi Habibullah Camp (Khyber Pakhtunkhwa) in 2019, followed by refresher training in 2021. Most of the instructors being employed for physical and weapons training were Pakistan Army personnel”.

The Army said that Ali had been given Rs 20,000 by Atiq-ur-Rehman for his mother’s treatment and was promised Rs 30,000 more on his safe return from Pattan near Baramulla, where the group was to deliver the war-like stores.

“However, it is evident that it had more nefarious designs which even the surrendered terrorist is unaware of. The false and fake narrative of ‘Islam being in danger’ and perceived killings, including atrocities being committed against Muslims in Kashmir, was the main theme of indoctrination during the training,” the statement said.

It added: “Possibly, the surrendered Pakistan national was coerced and lured into joining the terrorist ranks due to his poor financial condition.  Apparently, his appeal for surrender, as soon as his mate was killed, highlights that he was not convinced about the jihadi narrative”.

The Army statement added: “The Kashmir Valley is returning to peace, much to the discomfort of Pakistan and its proxies. The infiltration bids indicate Pakistan’s desperate attempts to sustain cross-border terrorism and bring in weapons to orchestrate violent incidents in the Valley by hiring mercenaries from the Pakistani hinterland of Punjab". It alleged that the Pakistan Army’s “connivance in abetting infiltration continues, as it is difficult to attempt crossing the LoC without the active support of local Pakistani military commanders”.