The Defence Minister onboard INS Vikramaditya also joined the ship's crew in the morning Yoga. 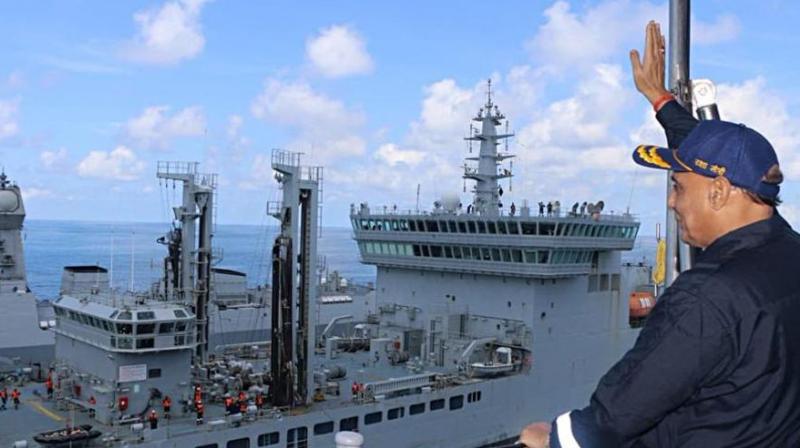 "Raksha Mantri Shri Rajnath Singh interacting with the 'Black Panthers' who defend our seas. RM was also briefed about the functioning of 'Mig-29K' during his day at Sea on INS Vikramaditya," the Defence Ministry tweeted.

Indian Naval Air Squadron 303, the frontline fighter squadron of Indian Navy, was commissioned on 11 May 2013.

The Defence Minister onboard INS Vikramaditya also joined the ship's crew in the morning Yoga followed by a walk around of the ship.

Singh also interacted with the personnel of the Indian Navy's Sword Arm, the Western Fleet.

"I am most impressed to see the professionalism, commitment and spirited approach shown by the brave warriors of the Indian Navy," he tweeted.

Earlier in the morning, Singh said that the Indian Navy is fully prepared to tackle any maritime security challenge.

"I can say with full confidence that our Navy has made full arrangements for maritime security. There is no scope of any doubt about it," Singh told media onboard INS Vikramaditya.

He said Pakistan continues to make attempts to destabilise and divide the country and asserted that Navy and Coast Guard are keeping a strict vigil to foil such efforts.

Singh said: "We cannot forget 26/11 and if there was a lapse (that led to the attack) then it cannot be repeated. Our Navy and Coast Guard are always on alert."

The Defence Minister, who also spent Saturday night onboard INS Vikramaditya, had earlier tweeted: "Spent 24 hours at INS Vikramaditya. This Aircraft Carrier is the 'Sikandar of Samundar'. Visiting 'Vikramaditya' was one of the most memorable experiences of my life. A Day at Sea has given me a new perspective about the capabilities and power of the Indian Navy."