During her visit to the LoC, Sitharaman was briefed about the 'robust counter-infiltration posture' adopted along the de facto border. 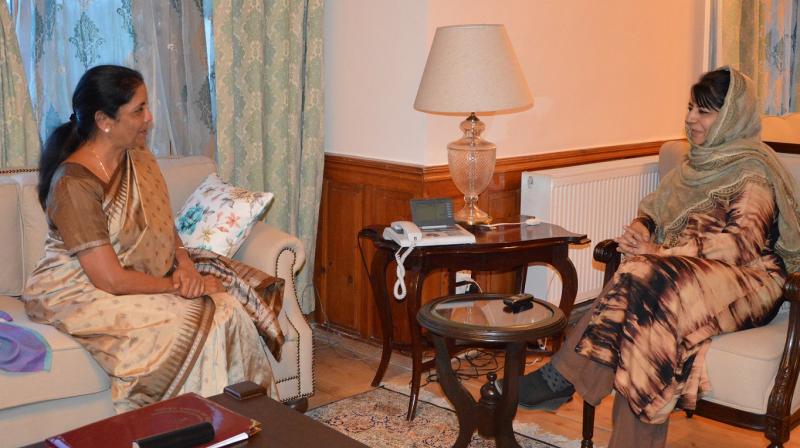 Defence Minister Nirmala Sitharaman, who is on a two-day visit to Jammu and Kashmir, has met Chief Minister Mehbooba Mufti and discussed the overall security situation and other related issues with them. (Photo: DC)(Photo: DC)

Srinagar: Defence Minister, Nirmala Sitharaman, on Friday visited Line of Control (LoC) for on spot assessment of the situation.

She interacted with the soldiers and officers of the Army at one of the forward posts.

She was accompanied by Army Chief General Bipin Rawat, a defence spokesman said.

Sitharaman is holding a series of meetings with senior Army commanders in Srinagar and Leh to review the security situation along the borders with Pakistan and China and also in the hinterland.

A statement issued by the Army in Srinagar said the Defence Minister during her visit to the LoC was briefed about the “robust counter-infiltration posture” adopted along the de facto border.

On her return, she was briefed by the Army commanders in Srinagar’s Badami Bagh Cantonment on the prevailing security situation in Jammu and Kashmir.

“She was given an overview of the counter-infiltration and counter-terrorism operations undertaken in the recent past. She appreciated the effectiveness of the intelligence and operational grids and commended the troops for the excellent operational successes, which had contributed significantly towards a secure environment in the State,” the statement said.

The Defence Minister, who is on a two-day visit to Jammu and Kashmir, has met Governor N N Vohra and Chief Minister Mehbooba Mufti, separately and discussed the overall security situation and other related issues with them.

After her overnight stay in Srinagar, Sitharaman will fly to Thoise (Siachen) early on Saturday morning, the Army sources said.

This is Nirmala Sitharaman's maiden visit of the sensitive border state after assuming the charge as the country’s second woman defence minister earlier in September.

The LoC has witnessed a series of ceasefire violations in past few weeks leaving several people dead and wounded besides triggering migration to safer locations by hundreds of the border-dwellers.

The International Border (IB) with Pakistan in Jammu region also saw escalation in such incidents.

The Army officials said that the infiltration from across the LoC has also increased although most of such attempts were foiled by “our alert jawans” after killing over a dozen intruders in past two weeks. They claimed that a large number of militants are waiting at launch pads on the other side of the LoC to sneak into this side.

The Defence Minister will also take stock of the situation prevailing along the border with China in Ladakh region, the official sources said.

The Army officials added that the Defence Minister will hold a separate meeting with top Army commanders including Northern Army Commander Lt. Gen. Devraj Anbu and the Corps Commanders of all the three Army corps based in Srinagar and Nagrota (Jammu) for a comprehensive review of the security situation along the LoC with Pakistan, Line of Actual Control (LAC) with China and inside Jammu and Kashmir. A similar meeting is being organised at the 14 Corps headquarters in Leh (Ladakh).

The security forces have claimed that their ‘Operation All Out’ launched in the Kashmir Valley in August has yielded “positive results” as a number of militants including several top commanders have been killed and few other arrested or they have surrender.

“The operation will continue till all the terrorists and militants are eliminated or they surrender to clean Kashmir of the menace of violence and terrorism,” J&K’s Director General of Police, Shesh Paul Vaid, had said recently.

However, the stringent measures and also the ‘surgical strikes’ carries out by the Army across the LoC in 2016 could not stop the incidence of infiltration and ceasefire violations along the de facto border.

According to an IndianSpend analysis of data from the South Asian terrorism Portal (SATP) run by a New Delhi non-profit organisation called Institute for Conflict Management, there has been a 31 per cent increase in deaths due to terror related incidents in Jammu and Kashmir since the Army claimed conducting surgical strikes in PoK a year ago.

According to the report the number of such deaths went up to 323 in 2016-2017 (till September 24) from 246 reported in 2015-16 Officials said that, on September 30, the Defence Minister will visit Siachen Glacier to meet the Army officers and jawans at the world’s highest battle ground at the height of 18,875 feet from sea level. Though the guns fell silent many months ago, the Army continued to suffer casualties due to weather related incidents in the Siachen area.

Meanwhile, the Border Security Force (BSF) which takes care of the IB called Working Boundary in Pakistan said on Friday that it denounced the recent killing of two of its jawans by Pakistani snipers Ranger during a flag meeting with Pakistan Rangers held in Suchetgarh area of Jammu district. The BSF lodged its complaint at a 45-minute meeting of its sector commanders with their Pakistani counterparts.

A spokesman of the BSF said that it strongly objected to the "dastardly acts of sniping" by Pakistan Rangers of two BSF soldiers on September 24 and August 25 along the IB and the "unprovoked cross-border firing and shelling" on many Indian border villages.

The spokesman added, “Pakistan Rangers promised required measures would be taken to maintain peace at the border and also requested that the BSF should restrain as much as possible in counter measures to see that no civilian loss is caused on the Pakistan side.”