The panel was appointed to recommend measures to enhance combat capability of the armed forces. 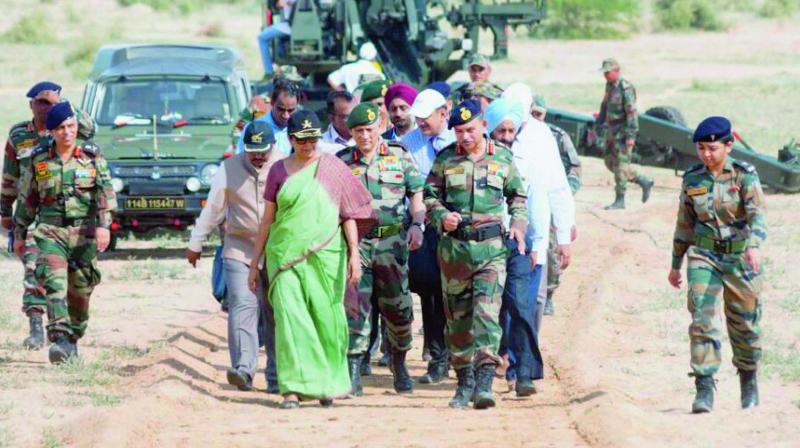 In her first message after assuming charge as defence minister on September 7, 2107, Nirmala Sitharaman said, “My priority will definitely be the armed forces preparedness. It is important that the Indian armed forces receive the attention in terms of giving them every endowment and equipment necessary for them to perform their duty with the best of equipment available,” and added that she will also be pursuing alongside, “Make in India” and welfare of soldiers and their families.

Ms Sitharaman has taken charge shortly after Mr Jaitley’s announcement in August 2017 that the government has decided to implement 65 of the 99 recommendations of the Shekatkar Committee pertaining to the Army. The panel was appointed to recommend measures to enhance combat capability of the armed forces.

“I shall attend to all the long pending issues and in consultation and the Prime Minister and the Cabinet Committee on Security (CCS) ensure that those pending issues are resolved,” Ms Sitharaman stated. On India’s defence capabilities, she laid emphasis on having a major role for “Make in India” in defence production and said, “We shall ensure that the important characters of what makes ‘Make in India’ an important flagship programme of the Prime Minister is given full play for defence production because India, as you know, is a very big defence equipment procurer.”

On her other priority of armed forces families and their welfare, Ms Sitharaman said, “Let us not for a moment forget that it is in their welfare, in their families’ welfare that we can ensure that the soldiers at the very toughest borders, challenging zones in which they are protecting this country, remain absolutely assured that their interests are being taken care of.” Pledging to do her best to ensure that “defence and defence priorities are well attended to”, she added, “I shall be available round-the-clock.”

The general opinion of services officers during the tenure of Ms Sitharaman’s recent predecessor Manohar Parrikar was that he was quite accessible, unlike some of his predecessors. And while he being a technocrat was quite an asset as defence minister, a limitation in the aspect of his accessibility was his preoccupation with Goa, which eventually resulted in his tenure being truncated.

Born on August 18, 1959, in Madurai, Tamil Nadu, Ms Sitharaman graduated in Economics from Seethalakshmi Ramaswamy College in Tiruchirappalli and did her masters in Economics from Jawaharlal Nehru University, New Delhi. Thereafter, in London, she did a stint with the Agricultural Engineers Association, worked as senior manager (research and analysis) with PricewaterhouseCoopers and did a short stint with BBC.

With that creditable record, back in India, she became a member of the National Council for Women from 2003 to 2005, BJP’s national executive from 2006, being elected as party’s spokesperson in 2010. Known to be a prolific reader and writer, whose columns are incisive and impactful, as a spokesperson she has been articulate and assertive in panel discussions, which often become fish markets. She reportedly penned press releases herself and meticulously edited any conversation of the party that went to the media. About the contentious Article 370, she said that back in 1964 the Prime Minister had himself said that there are ways to slowly do away with the provision and it was not an unheard of topic being put up for discussion.

Shortly after taking over as defence minister Ms Sitharaman visited headquarters of Western Command at Chandimandir Military Station, where she was briefed on operational preparedness, administrative issues and ex-servicemen affairs by General Officer Commanding-in-Chief Western Command Lt. Gen. Surinder Singh. Appreciating the efforts of the Indian Army and Western Command, she expressed her confidence in its operational might and lauded its contribution in all spheres, including assistance to civilian administration, specially during the recent past. Paying homage to the brave martyrs at Veer Smriti, she laid a wreath, planted a sapling and spent some time interacting with junior commissioned officers (JCOs) and other ranks (ORs) of units billeted at Chandigarh.

As new defence minister Ms Sitharaman has a huge chunk of tasks. Modernisation of the three services, follow-up of many projects related to defence production and agreements on acquisitions already underway, will require relentless pursuit and prodding of the defence ministry’s bureaucratic machinery. Her reported intent of daily interactions with the three Services Chiefs may not be possible literally every day, owing to MS Sitharaman and the three of them touring frequently, but even if implemented a couple of times a week/as often as possible, is a step in the right direction.

All three services have urgent requirements of weapons and critical equipment, defence strategic infrastructure development as well as matters related to administration, personnel and their welfare, which in the long run are related to morale of all ranks.

Former Controller General of Defence Accounts and then financial adviser, defence services (retired in May 2016) Sudhansu Mohanty in his exhaustive and incisive comment in the media recently titled “What Nirmala Sitharaman can do to revamp the opaque defence ministry” states: “Incurring expenditure on capital items through revenue procedure (CBRP), which has been going on for about a decade, is a very questionable — even reprehensible — practice and must be stopped. The Comptroller and Auditor General has already flagged this issue. To me, the ideal thing is to merge the Defence Procurement Manual (DPM) and the Defence Procurement Procedure (DPP) into one procedure, the DPP, and with the need for trial for established capital/revenue procurement items eliminated. It will put in place the same rigour for revenue items as for capital acquisition — something completely missing on CBRP items”. Among other issues elaborated upon by Mr Mohanty are leakage of government revenue and defence public sector units, ordnance factories and Defence Research and Development Organisation.

With all that Ms Sitharaman has expressed since taking over as the defence minister and with all that needs to be done, given her past record, there seems no doubt that with her sincerity, determination and her fresh approach, much will be achieved to strengthen India’s military muscle.