The rescue of Father Tom was reportedly after the intervention of Oman, which utilised its influence in Yemen. 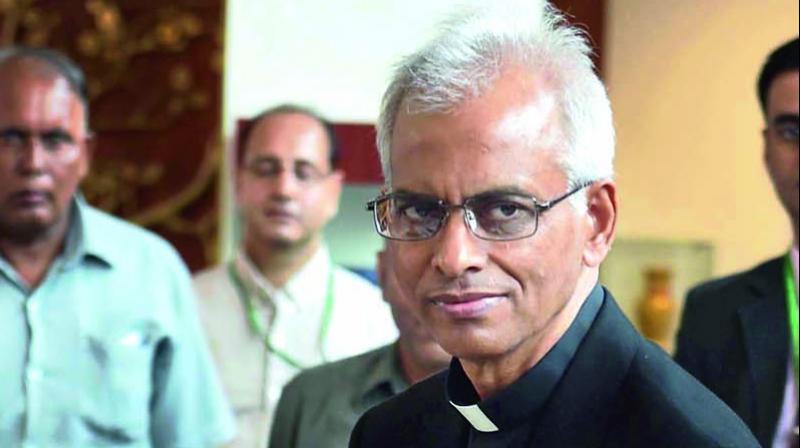 New Delhi: The Indian Christian priest from Kerala, Father Tom Uzhunnalil, who was rescued from his suspected ISIS captors in Yemen on September 12, returned to the country on Thursday after spending some time in Vatican City and met both Prime Minister Narendra Modi and external affairs minister Sushma Swaraj. But in a symbolic gesture and outreach to the Christian community in Kerala, it was newly-inducted minister of state for tourism Alphons Kannanthanam who played a prominent role in welcoming the priest back home. In fact, in photos released on Twitter by the ministry of external affairs (MEA) on Father Tom’s separate meetings with PM Modi and Ms Swaraj, Mr Kann-anthanam was shown standing next to PM Modi and with Ms Swaraj to welcome the priest.

After increasing its influence steadily among Hindus in the southern state, the BJP is also wooing the Christian community in Kerala, where it is trying to make a significant electoral presence.

“Such kind of war may end in this world and everybody be able to live peacefully and harmoniously. I have prayed for those who kept me (captive). They gave me food and didn’t harm me physically,” Father Tom said.

In a statement, the MEA said, “Rev. Father Tom Uzhunnalil returned to New Delhi from Vatican City today after release from captivity in Yemen. He was abducted on March 4, 2016, reportedly in an incident of terrorist attack in Aden by an unidentified group...  Since his abduction, the ministry of external affairs had been making all possible efforts to secure his safe release and was in constant.”

The rescue of Father Tom was reportedly after the intervention of Oman, which utilised its influence in Yemen. Some media reports from West Asian said Father Tom had thanked Oman’s ruler Sultan Qaboos for his release and that he had been flown to Muscat.

In a video last December, Father Tom had purportedly blamed the Indian government and the Vatican for alleged lack of action in securing his release. “Several months have gone by and my captors have made many contacts with the Governm-ent of India to get me released. Honourable Pre-sident and Prime Minister of India, I am very sad nothing has been done seriously in my regard,”  the Christian priest had said in the video.

Reports have been in news that everything is being done to get me released quickly but, in reality, nothing seems to have happened,”  the Christian priest had said in the video.

He added that had he been “a European priest, I would have been taken more seriously by authorities and people and (they) would have got me released. I am from India and therefore, I perhaps am not considered as of much value”. He had reportedly referred to a kidnapped French journalist who was released and said this had happened because the journalist was from France.