Eyewitness Mishra also said, he carried cold water from home to sprinkle it on victims of the stampede and help them regain consciousness. 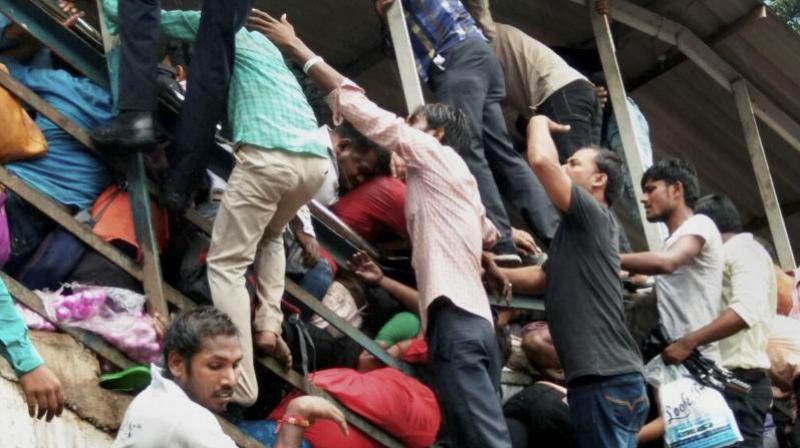 Mumbai: It was raining cats and dogs on Friday morning and Manish Mishra was in the safety of his home near the city's Elphinstone Road railway station when he suddenly heard a loud thud.

Outside, he saw "thousands cramped" in the six-to-eight-feet foot overbridge-- people scrambling to get down the stairs, some climbing up to avoid being drenched and still others just remaining  under the bridge canopy to escape rains. Officials said at least 22 people were killed and 39 injured in the rush-hour stampede on the narrow overbridge linking Elphinstone Road and Parel suburban stations during the heavy rain.

"It was around 10 am. There was a loud noise at the time of the stampede. There were thousands of people cramped in the six-to-eight-feet gap on the bridge," Mishra said.

Several people waiting on the platform also got dragged into the chaos, he said. "We took cold water from our home, rushed to the spot and sprinkled it on some of those who were caught in the stampede so that they gain consciousness," he added.

"Police came later and shifted them from the spot."

The decades old overbridge is used by lakhs of people to commute to the commercial area with high-end corporate and media offices. "The presence of fish and flower market nearby also adds to the congestion," Mishra said.

Kishor Thakkar is a regular commuter on the route. He said there was a loud noise, which may have led the people to believe that a part of the bridge had fallen leading to the stampede. "People on the bridge were in a rush to get down, while those who had alighted from suburban trains were making their way up," he said.

"Some who were rushing outside stopped midway to escape rains which led to the chaos," he said. Thakkar said he alerted the local police at 10.34 am but by the time they arrived the bridge was vacated.

"It was the people not the police who rushed to help those caught in the stampede." He put the blame for the accident on the railways. "We had given a letter to the railway administration six months ago with a request to do something to improve the shoddy state of affairs here," he said.

Aaditya, a teenager who also lives in the same building as Mishra, and was also a witness to the tragedy, said he was eating when the stampede took place. "At first, I thought it was usual crowd. Suddenly all hell broke loose," he added.