India   All India  29 Sep 2017  Jaitley's remark too cheap to comment on: Yashwant Sinha hits back
India, All India

Jaitley's remark too cheap to comment on: Yashwant Sinha hits back

Sinha said FinMin's criticism of his work amounted to criticism of then PM Atal Bihari Vajpayee who had entrusted him with key ministries. 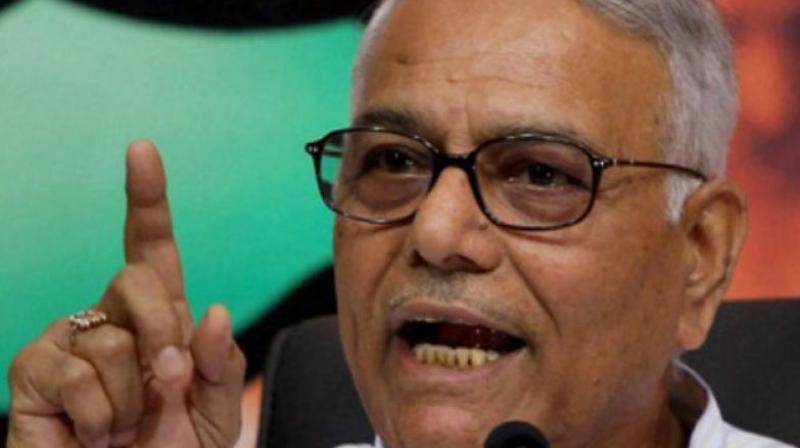 A newspaper article written by Yashwant Sinha on Wednesday in which he slammed the government's handling of the economy has sparked a raging political debate with opposition leaders coming out in his support while top ministers rejecting his criticism. (Photo: PTI)

New Delhi: BJP veteran Yashwant Sinha on Friday accused Arun Jaitley of making "cheap" remarks and said the finance minister's criticism of his work amounted to criticism of then Prime Minister Atal Bihari Vajpayee who had entrusted him with key ministries.

In a dig at Jaitley over his "job applicant at 80" barb, Sinha said the finance minister did a great "disservice" to L K Advani as he first quoted the BJP veteran's advice that his remarks should be confined to issues and not involve personalities, and then went on to make a personal attack against him.

"So cheap is the remark that I consider it below my dignity to respond to it," Sinha said.

He then went on to recount his decision to quit the IAS 12 years before his retirement to join politics and added that he "voluntarily" decided not to contest Lok Sabha election in 2014 when he was "certain" of his win as he wanted to quit electoral politics.

Asked if he would not contest elections now, he replied in the affirmative. "He (Jaitley) has completely forgotten my background. I gave up the IAS when I had 12 years of service left to join public life. I refused to become a Minister of State in the V P Singh Cabinet in 1989 as I had some issues. I retired from electoral politics. I am not active in politics and am living a quiet life in my corner. So if I was looking for a post, then first of all I would not have given up all these things I gave up," he said.

Sinha also hit back at Jaitley and other BJP leaders for their criticism of his work as a finance minister under Vajpayee and said he was given the crucial external affairs ministry and became "even a more active member of the Cabinet Committee on Security".

This government, Sinha noted, has given the great honour of Bharat Ratna to Atal Bihari Vajpayee and BJP leaders then criticise him too. He had presented five regular and two interim Union budgets, he said.

Asked about his response to the government's recent moves, including the constitution of the Economic Advisory Council, Sinha said, "Let's see what great pearls of wisdom they come out with. Nothing has happened so far, so I will wait for some action before I make my comments."

A newspaper article written by Sinha on Wednesday in which he slammed the government's handling of the economy has sparked a raging political debate with opposition leaders coming out in his support while top ministers rejecting his criticism and insisting that the Indian economy remains strong and vibrant.