India   All India  29 Sep 2017  Jaitley wouldn't have been FM if I was job aspirant, asserts Yashwant Sinha
India, All India

Jaitley wouldn't have been FM if I was job aspirant, asserts Yashwant Sinha

Yashwant, in an article in the Indian Express, had blamed Jaitley and the Narendra Modi-led government for the “sinking” economy. 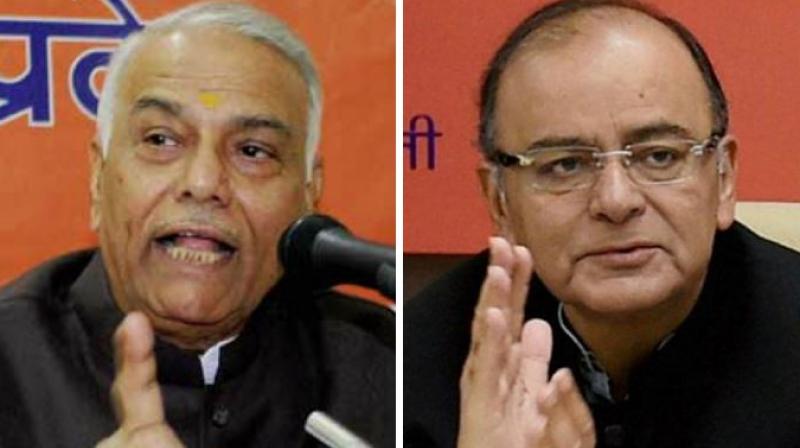 Jaitley refrained from taking 84-year-old Yashwant’s name, but reminded him how he and the then prime minister Atal Behari Vajpayee had taken the finance portfolio from him. (Photo: PTI/File)

New Delhi: The war of words in the ruling party intensified after Union Finance Minister Arun Jaitley on Thursday took a dig at Yashwant Sinha by describing him as "a job applicant at 80".

"The title of your book should have been 'India @70, Modi @3.5 and a job applicant @80," Jaitley said at the release of the book 'India @70 Modi @3.5: Capturing India's transformation Under Narendra Modi' by Bibek Debroi and Ashok Malik.

Jaitley refrained from taking 84-year-old Yashwant’s name, but reminded him how he and the then prime minister Atal Behari Vajpayee had taken the finance portfolio from him.

Responding to Jaitley’s barb on Thursday, former finance minister Yashwant said, “If I was a job applicant, he (Jaitley) would not be there in the first place”, according to The Indian Express.

Yashwant, in an article in the IE, had blamed Jaitley and the Narendra Modi-led government for the “sinking” economy. He received flak for the piece from several BJP leaders, including his son Jayant Sinha.

However, he continued to maintain his stand that the government “completely misread” the situation on the economic front and “kept chipping away at the margins”. “They kept singing praises of themselves, patting their backs” instead of acknowledging “there was a problem”.

The former finance minister said many BJP parliamentarian had confided in him that “no one was being allowed to speak or raise issues at meetings of the parliamentary party”.

In the column published in the national daily on Wednesday, the former finance minister had said that demonetisation proved to be an "unmitigated economic disaster" and that the Goods and Services Tax (GST) was a "badly conceived and poorly implemented" havoc.

In his article, Sinha also took a jibe at raids conducted by Income Tax department, Enforcement Directorate and Central Bureau of Investigation and said that it has become "a new game to instill fear in the minds of people," adding, "We protested against raid raj when we were in opposition. Today it has become the order of the day."