The two countries also inked an “MoU for Technical Cooperation on Police Training and Development”. 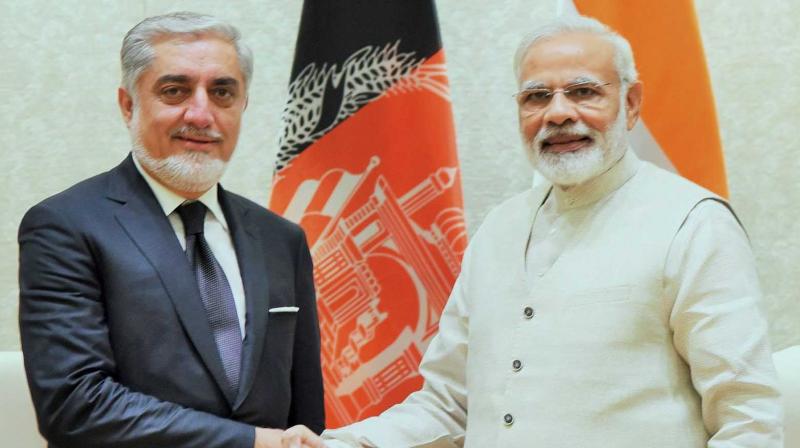 New Delhi: Afghan chief executive Abdullah Abdullah, whose visit to India was postponed by a day reportedly due to the rocket attacks in Kabul by the Taliban, reached New Delhi on Thursday and met Prime Minister Narendra Modi while also holding talks with external affairs minister Sushma Swaraj on the entire gamut of bilateral ties.

While Afghanistan conveyed its “deep appreciation for India’s continuing support for infrastructure development and capacity building in Afghanistan”, India reiterated its “commitment to extend full support to Afghanistan’s efforts for building a peaceful, united, prosperous, inclusive and democratic Afghanistan”.

The two countries also inked an “MoU for Technical Cooperation on Police Training and Development”.

The continuing Indo-Afghan bonhomie comes as a strong message to Pakistan which has been masterminding terror activities both in India and Afghanistan. The MEA said Abdullah and Swaraj “discussed the entire gamut” of ties and “strengthened the strategic partnership”.

In a statement, the Indian government said, “PM Narendra Modi met the chief executive of Afghanistan, Dr Abdullah Abdullah, today afternoon. The PM extended a warm welcome to Dr Abdullah. Both leaders reaffirmed the strength and closeness of the strat-egic partnership between India and Afghanistan.

They welcomed the accelerated cooperation, including through the recent announcement of a new development partnership during the meeting of the bilateral Strategic Partnership Council. They discussed enhancing bilateral economic and development cooperation and the abundant opportunities in this regard.”