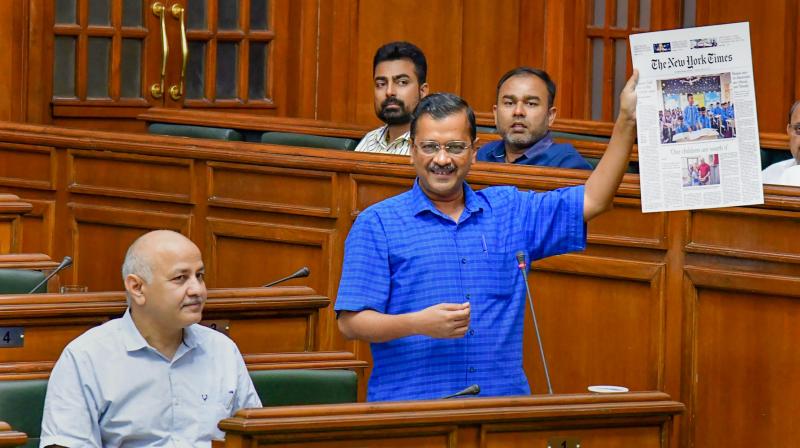 New Delhi: Chief Minister Arvind Kejriwal on Monday tabled a confidence motion in the Delhi Assembly, saying it was meant to prove that 'Operation Lotus' could have been successful in other states but failed here as all AAP MLAs were "hardcore honest".

Maintaining that the BJP's 'Operation Lotus' to topple his government failed as it could not poach any of the AAP MLAs, Kejriwal alleged that the BJP will try to topple the Jharkhand government in the next 15 days.

He also accused the Centre of waiving loans of billionaires but not that of students and farmers.

The present central government is the "most corrupt" one as they buy MLAs, he alleged.

Challenging the BJP to buy even one MLA of the AAP, Kejriwal said, "The confidence motion is to show that 'Operation Lotus' could have been successful in Madhya Pradesh, Maharashtra and other states but failed here in Delhi. It is also to show that every AAP MLA is hardcore honest".

At some places they even paid Rs 50 crore, he alleged.

"You say that you are against corruption but you are buying MLAs. This is the most corrupt (central) government. You will face the curse of poor people. In 15 days, they will try to topple Jharkhand government and then petrol and diesel prices will go up," Kejriwal said.

He said the next time when petrol diesel prices go up, people will understand where the money is going.

The BJP has accused Kejriwal of using the assembly for fanning political propaganda and indulging in drama to divert people's attention from the liquor "scam" of his government.

The AAP has 62 MLAs in the 70-member Delhi Assembly, while the BJP has eight.