Will CJI name ‘rebel’ as his successor?

According to highly-placed sources, the government is likely to accept the CJI’s recommendation. 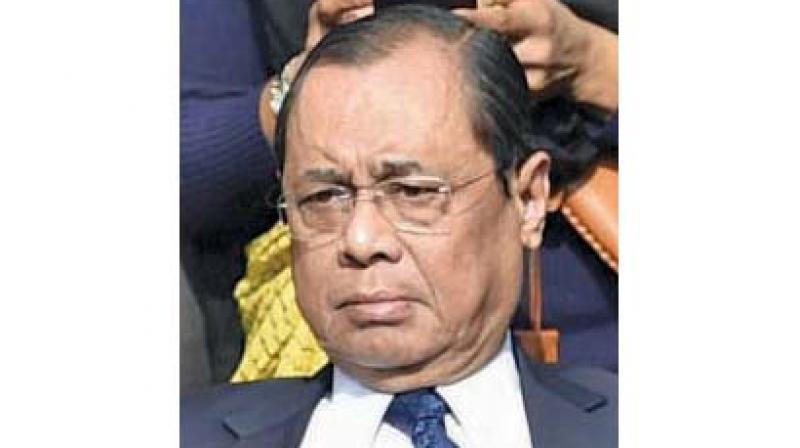 New Delhi: The Union law and justice ministry has sent a communication to Chief Justice of India Dipak Misra to recommend the name of his successor, paving the way for the senior-most judge of the Supreme Court, Justice Ranjan Gogoi, to take charge from CJI Misra on his retirement on October 2.

Sources said CJI Misra is likely to send Justice Gogoi’s name as an official confirmation to the law ministry on September 2, ending speculation that Justice Gogoi may not be his choice due to their “strained” relations. There was no love lost between CJI Misra and Justice Gogoi following an unprecedented press conference by four senior-most judges, including Justice Gogoi, in January this year when they had criticised CJI Misra over various issues, especially the manner of allocation of cases to certain benches.

By recommending Justice Gogoi’s name, CJI Misra would prove that he has not allowed the bitter “revolt” by the four judges, led by Justice Gogoi, to impact his decision to follow the convention of the Supreme Court.

On Tuesday evening, Supreme Court advocate Indira Jaising tweeted and confirmed that Justice Gogoi is all set to become the 46th Chief Justice of India.  According to highly-placed sources, the government is likely to accept the CJI’s recommendation. As per the memorandum of procedure, evolved under the collegium system  which governs the appointment of members of the higher judiciary, “appointment to the office of the CJI should be of the senior-most judge of the Supreme Court considered fit to hold the office”.

At a recent press conference, law ministry Ravi Shankar Prasad was asked whether the government would follow the laid-down convention and procedure to appoint Justice Ranjan Gogoi as the next CJI after CJI Misra demits office.

The minister had said, “The question is imaginary... As far as the appointment of the Chief Justice of India is concerned, the convention is clear... The sitting Chief Justice names the senior-most judge (of the top court) as his successor. When the name comes to us, we will discuss it.”

Since Independence, there have been two attempts to bypass the convention or “supersede” judges while picking a CJI and both of them took place under Central governments headed by the Congress. The first “supersession” was in April 1973 involving three judges.

The then Prime Minister, Indira Gandhi, appointed Justice A.N. Ray as the CJI overlooking three senior-most judges of the Supreme Court, Justices J.M. Shelat, A.N. Grover and K.S. Hegde. The second and, possibly, the most infamous supersession happened during  Emergency when Mrs Gandhi disapproved the dissenting judgment of Justice H.R. Khanna, who held that the fundamental right to life stood abrogated during Emergency, was overlooked and Justice M.H. Beg was appointed as the CJI in January 1977.