Schools and colleges were also cleaned up and sanitised as flood waters had entered them, destroying books and furniture. 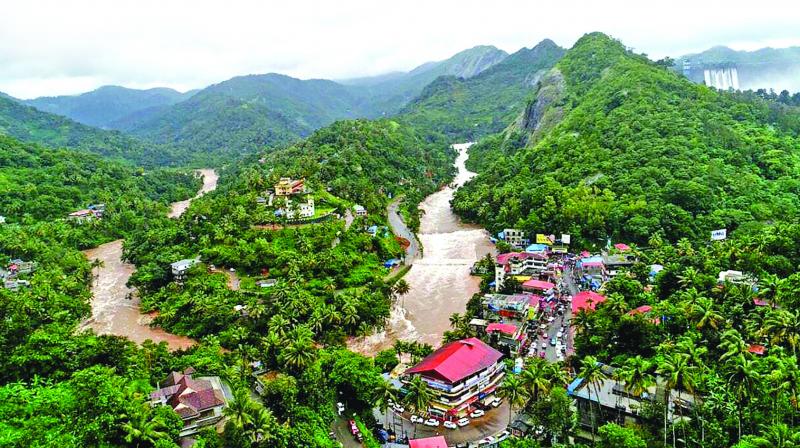 Thiruvananthapuram: Educational institutions in Kerala re-opened on Wednesday, a fortnight after the devastating deluge ravaged the state, claiming 474 lives since the onset of South West Monsoon.

The onam vacation was advanced due to heavy rains and floods and over 10 lakh people who were displaced by the deluge after their houses were either destroyed or damaged due to flood waters, were accommodated in schools and colleges which functioned as relief camps.

Schools and colleges were also cleaned up and sanitised as flood waters had entered them, destroying books and furniture. As schools reopened today, teachers welcomed children by singing songs.

Many of their homes had been affected by floods and hence a small cultural programme would be organised and sweets distributed to calm their minds, a teacher at a government school in Alappuzha district said.

According to Education Minister, Prof C Raveedranath, at least 650 odd schools were affected by floods in Kerala.

In some areas, few schools are yet to be opened as they continue to function as relief camps. But it is expected that by September 3 all schools will become functional, he said.

There are still about 1.97 lakh people in relief camps in the affected areas. Chief Minister Pinarayi Vijayan said children who had lost their books and uniforms in the flood will be provided new ones.

In a tweet, Vijayan wished them a great school year ahead and said these children, who survived a calamity, "represent our hope".

In Malappuram, 50 tiny tots of a local school visited Malappuram collector Amit Meena and handed over their piggy banks for flood relief. In Kasaragod, about 450-odd private bus operators have decided to give their day's collection tomorrow for flood relief.

The massive cleaning up operation which kick-started on Tuesday at Kuttanad in Alappuzha district would continue today as well. Yesterday, 28,757 houses, 288 public institutions like hospitals and offices, 52 schools and 122 public spaces like markets were cleaned by over 60,000 volunteers, Finance minister Thomas Isaac said.

Meanwhile, a high-level delegation led by Union Minister of State(Finance), Pon Radhakrishnan will review relief measures and rehabilitation efforts being undertaken by banks and insurance companies in the state in view of large-scale devastation caused by recent floods in the state.

The delegation would comprise senior officers from the Central government, including Additional Secretary, Debashish Panda and Economic Adviser, N Srinivasa Rao from the Department of Financial Services, Ministry of Finance.

Chairmen and Managing Directors of various public sector banks (PSBs) and insurance companies including Agriculture Insurance Co. of India Ltd, and NABARD would also be present in the meeting with senior officers from the state government and other agencies concerned.

Various relief measures pertaining to re-opening of submerged and flood-affected bank branches and ATMs, exchange of soiled and defective currency and extension of loan repayment period etc. have already been initiated by all banks.

In view of the disruption caused due to severe floods in the state, the Central Board of Direct Taxes (CBDT) has further extended the "Due Date" for furnishing Income Tax Returns from August 31 to September 15 for all Income Tax assessees in Kerala.