India   All India  29 Aug 2018  Five arrested activists to be kept under house arrest till Sept 6, says SC
India, All India

Five arrested activists to be kept under house arrest till Sept 6, says SC 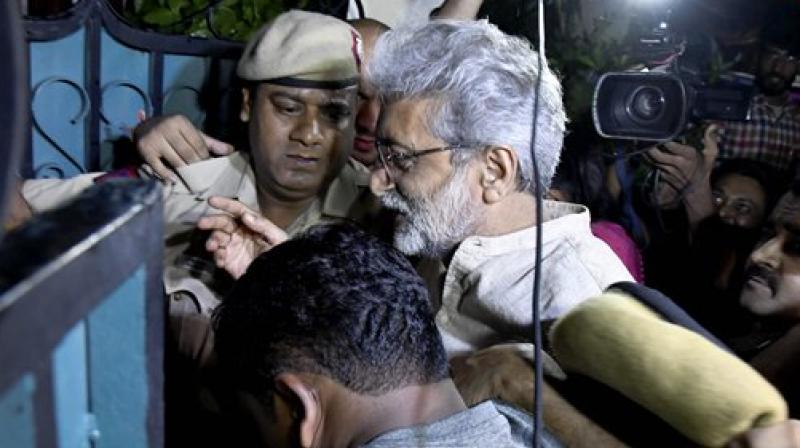 The Supreme Court said, 'Dissent is the 'safety valve of democracy'. If you don't allow these safety valves, it will burst.' (Photo: PTI)

New Delhi: The Supreme Court on Wednesday directed all five human rights activists arrested in the Bhima-Koregaon case to be kept under house arrest till September 6, saying dissent was the "safety valve" of democracy.

The five activists will now not be sent to jail till September 6 but will remain in house arrest under police watch.

The apex court questioned the Maharashtra police for arresting these activists around nine months of the Bhima-Koregaon incident.

"Dissent is the safety valve of democracy and if you don't allow these safety valves, it will burst," the bench headed by Chief Justice of India Dipak Misra said.

The Supreme Court also issued notice to the Maharashtra state government and the state police on the plea filed by five intellectuals, including historian Romila Thapar and economists Prabhat Patnaik and Devika Jain, against the arrest of the rights activists yesterday in connection with the case.

The counsel, appearing for Maharashtra, raised the issue of maintainability of the plea, saying a "stranger" cannot seek relief for the activists who have already approached the high courts.

The Maharashtra Police had arrested them in connection with an FIR lodged there following an event -- 'Elgaar Parishad' (conclave) -- held on December 31 last year that had triggered violence at Koregaon-Bhima village.

The bench posted the matter for hearing on September 6.