Condemning arrest of five activists, Lalu Yadav said, 'there is an emergency like situation in the country'. 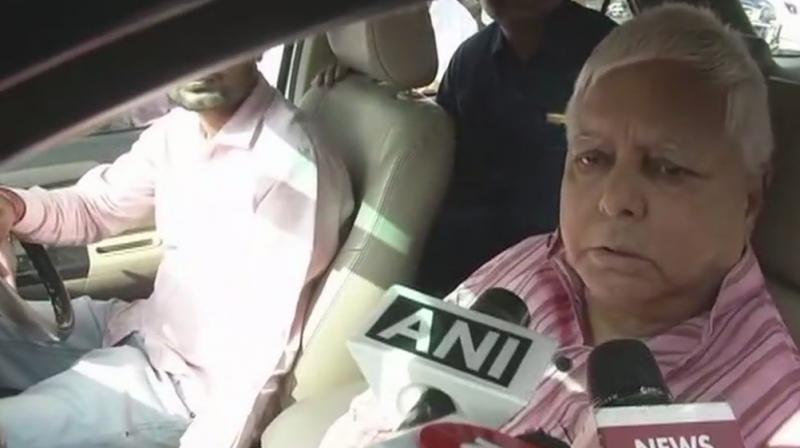 Patna: RJD Chief Lalu Yadav who is to surrender before the special CBI court on Thursday in connection with the fodder scam case condemned the arrest of five activists and said that “there is an emergency like situation in the country”.

He gave the statement in Patna on Wednesday before leaving for Ranchi. This was his first political remark against the government after he was granted provisional bail on medical grounds in May this year.

“My party strongly condemns the arrest of intellectuals and activists. The government’s charge is that these activists were involved in hatching a plot to kill the Prime Minister but they have not given any proof against them. The country is heading towards dictatorship which is not right”, Lalu Yadav said.

The Jharkhand High Court last week had cancelled the provisional bail granted to RJD Chief Lalu Yadav, convicted in four fodder scam cases and asked him to surrender before the court by August 30.

Sources said Lalu Yadav gave the statement a day ahead of his surrender because the condition of bail had barred him from taking part in any political activities.

“I am not a person to surrender before anyone and nobody can stop me from speaking the truth. I am ready to sacrifice everything for social justice. Today my whole family has been implicated in false corruption charges but I know that sooner or later we will get justice. I have full faith in the judiciary”, Lalu Yadav said.

On Wednesday when asked about his medical condition Lalu Yadav said that he was being treated for various serious ailments at Mumbai based Asian Heart Institute but he had to return after the court refused his petition for extension of bail.

Lalu Yadav said he was not fully cured and was suffering from Kidney infections. He also expressed his desire to be shifted to RIMS where he was being treated before Jharkhand High Court gave him provisional bail on medical grounds in May this year.

“I need a regular checkup and I think I will be shifted to a hospital where I can be treated by a team of expert doctors. But the court will decide about these things after I surrender on Thursday”, the RJD chief said.

Lalu Yadav has been serving jail term in four fodder scam related cases. The case pertains to illegal withdrawal of money from various treasuries when RJD was in power in Bihar.

The fodder scam case had surfaced in 1996 and a charge sheet against 38 people was filed by the CBI on October 27, 1997. Lalu Yadav was made one of the main accused in the case.

The fifth cases relating to illegal withdrawal of Rs 139.39 crores from Doranda treasury is still pending with the court. Five fodder scam cases were shifted to Jharkhand after the separation of the state in 2001 while the trial in one case related to Bhagalpur treasury is going on in Patna CBI court.