India   All India  29 Aug 2017  Streamline PPPs to improve healthcare for the poor
India, All India

Streamline PPPs to improve healthcare for the poor

The government should introspect and question its ability to govern and run hospitals. 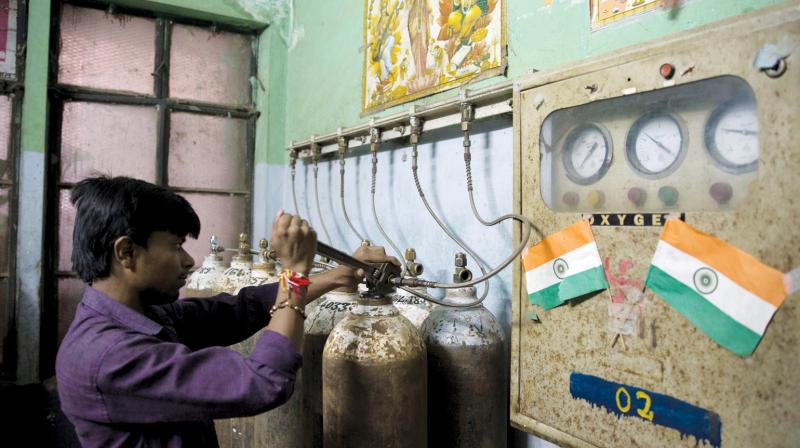 A file photo of a hospital staff member checks newly-arrived oxygen cylinders at Baba Raghav Das Medical College Hospital in Gorakhpur, Uttar Pradesh. Thirty-three children died on August 10 and 11 at the BRD Medical College in Gorakhpur, around the time there was a disruption in the oxygen supply. (Photo: AP )

The August 7 tragedy at the Baba Raghav Das (BRD) Medical College in Uttar Pradesh’s Gorakhpur district, where 60 children lost their lives due to lack of oxygen supply, is an outrageously reprehensible incident. Investigations by the government-appointed panel has blamed “financial irregularities” at the hospital for the delay in payments to the supplier. The oxygen vendor had stopped supply to the hospital because it owed Rs 64 lakh, with no payments made for months on end. As soon as news broke of 30 children dying due to alleged oxygen shortage, the hospital released a payment of Rs 20.84 lakh.

Critical observations of the two-page investigative report have opened a can of worms. Firstly, it has been revealed that the funds to pay the vendor were credited to the hospital’s account on August 5, holding at least six employees responsible for the delay in processing the amount. Furthermore, it holds the principal, HoD anaesthesia, and the pharmacist responsible for their unsatisfactory performance. If these officers had heeded the constant reminders about payments evasions, the crisis could have been averted. This dreadful episode embodies the grim situation that persists at government hospitals across the country. At a time when India stands at the threshold of economic development, administrative negligence in healthcare services sets a bad example on the global turf.

This tragedy is something, which obviously, was avoidable. The empathy shown and action taken were all in good spirits, but it was definitely reactive rather than proactive. One has to do a deep dive to look at the causes of this tragedy and many such tragedies happening across the country. The government should introspect and question its ability to govern and run hospitals. As we have always said, what is the lesson from this: how can we prevent such tragedies? How can we make sure adequate services are given to all sections of society? The tragedy should provide us a platform for thought-provoking discussions on this and all stakeholders should be involved in the discussions — people with domain knowledge on healthcare, vision, and people who are the end receivers of these services.

The approach the government has taken will most likely lead to more such tragedies. Not everything should be cost oriented. The focus should be on value-based, quality healthcare. Imagine how the government would have reacted if this had happened in a private institution? How many people would be in jail, however, in this instance, not one person has been put behind bars.

Some of the key worrying factors are the inferior quality healthcare resources, disinterest in enhancing the overall functioning of the hospital, and the rampant corruption and nepotism practised while devising vendor contracts. Sadly, the attitude at a government hospital is, “Let it go on, let me make my money”. In addition, the lack of accessibility to adequate medical services, specially to those living in rural or remote areas, is also a major concern. Though the government has done a great job of offering subsidised healthcare, it unfortunately works like opium. For instance, a person from Below the Poverty Line (BPL) category, armed with their subsidy card can avail state-sponsored medical assistance. In such a scenario, because they are getting access to a hospital, they are unwilling to report or question authority in case of discrepancies in the service. On their part, government-run medical institutions tend to gag the underprivileged lot with this “opium”.

Over the last two decades or so, several state governments have tried to rope in private healthcare players to offer affordable treatment to the masses. With an increasing number of public private partnerships (PPP) in the healthcare space, the pressure of offering funded medical services is now on private hospitals. Therefore, India has always had a patchy track record when it comes to PPP in healthcare.

Given the way the partnership is being constructed, it is leading to the destruction of private medical services. To make it a win-win situation for the hospitals and patients, the cure lies in streamlining PPPs along with structured subsidies — in a manner that it does not lead to a financial crunch at the hospitals, and is affordable and duly availed by those it is meant for.

A structured subsidy available for a temporary period and utilised only by those from poor sections of the society is ideal. And to avoid it from becoming “opium”, it should not be long-term. Those who manage to climb the economic ladder, should do away with BPL cards and hospitals must be vigilant about its misuse.

The government should be able to say to private healthcare providers, “I have a person who is economically weak, please provide him good healthcare, here is the subsidy”, and the government will monitor the person gets good services. Government should also work on facilitating private insurance schemes. Say if a person is an auto driver, based on his earning, he will contribute a certain amount of his earnings.

Similarly, other sections of society contribute and insurance is made compulsory whereby the cash-paying scenario disappears. With that, like we have seen in other advanced countries, the quality of healthcare will improve significantly and the cost will be at an appropriate level based on market forces, which insurance companies will cover so we do not put the individual in a position of financial crisis.

Recently, we celebrated 70 years of independence. I think it is high time we bring economic prosperity to people so they can afford value based quality healthcare and not cheap healthcare.

Government should focus on the economic well-being of the individual and it should become a monitoring agency so private healthcare can penetrate remote areas of the country to provide high quality of healthcare.

I hope this unfortunate tragedy teaches us a lesson for a lifetime and see how we can improve overall healthcare in the country for all sections of society and make it accessible and affordable.

The loss of innocent lives in Gorakhpur is a red alert for us which illustrates India’s healthcare crisis. It is time we become organised.

The writer, president of Association of Healthcare Providers (India), is adviser to Healthcare Federation of India. He is also the chairman and CEO of Healthcare Global Enterprises Ltd.