India   All India  29 Aug 2017  Each drop of your tear sears our heart: J&K Police to deceased cop's daughter
India, All India

Each drop of your tear sears our heart: J&K Police to deceased cop's daughter

Abdul Rashid was shot dead by militants while on duty at Mehandi Kadal of Anantnag in Jammu and Kashmir. 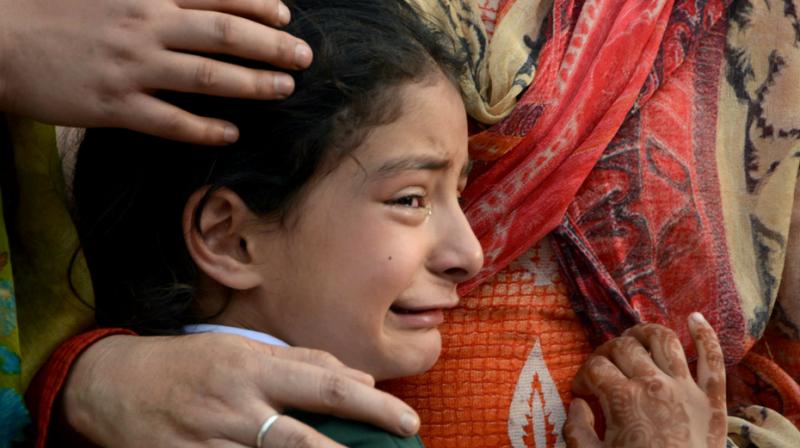 Zohra, daughter of deceased police officer Abdul Rasheed, who was killed in a shootout with suspected rebels, during the funeral at the police headquarters in Srinagar on Monday. (Photo: PTI)

Mumbai: A picture is worth a thousand words, and that is what an image of a girl weeping at her father's wreath-laying ceremony has done to scores of people across the country.

The image of Zohra breaking down in tears during the wreath-laying ceremony of her father Abdul Rashid, a Kashmiri policeman, has taken the social media by storm. Many poured their hearts out to the little one, offering heartfelt condolences.

Rashid was shot dead by militants while on duty at Mehandi Kadal of Anantnag in Jammu and Kashmir.

Deputy Inspector General (DIG) of Police South Kashmir, on behalf of the Jammu and Kashmir Police, expressed solidarity in the pain of the deceased policeman's daughter, Zohra, through a Facebook post.

The DIG posted a heartbreaking message saying, "Your tears have shaken many hearts...You are too young to understand as to why this happened".

Consoling Zohra, he said the J&K Police will never forget the sacrifice of his father.

"Each drop of your tear sears our heart," he said in the post.

The DIG went on to praise all those soldiers who had laid down their lives for the country. He on behalf of all the officers of J&K Police, also promised to cherish the memory of Rashid as a true policeman, who sacrificed his life in the line of duty.

Many also took to Twitter to express their grief over the loss, sharing the heart-breaking picture of the girl.