Justice Misra shot into limelight in November 2016 when he ordered all cinema halls to play the national anthem before the screening of films. 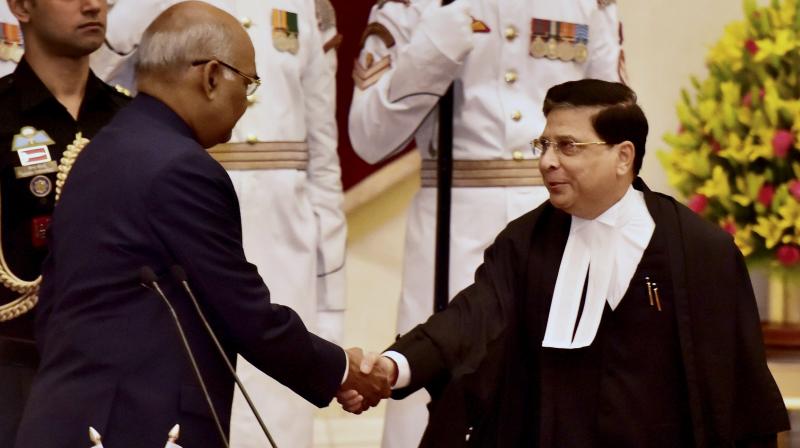 New Delhi: Senior most judge of the Supreme Court, Justice Dipak Misra, who gave the controversial judgment on ‘national anthem’, was on Monday sworn-in as the 45th Chief Justice of India by President Ram Nath Kovind at a brief function held at the Rashtrapathi Bhavan. He succeeds Justice J.S. Khehar who retired on Sunday.

Justice Misra (63) was elevated as a Supreme Court judge in 2011 and during the last six years he rendered several landmark judgments on various branches of law. He will have tenure of over 13 months and is due to retire in October 2018.

Justice Misra, who hails from Audit, is known for his impeccable honesty, integrity, simplicity, frank and forthright views. A scholar and erudite judge, he is proficient in Sanskrit, ancient history and literature, and this is reflected in his anecdotes as an interlude during the course of the hearing of sensitive cases.

Justice Misra shot into limelight in November 2016 when he ordered all cinema halls across the country to play the national anthem before the screening of films and that all present must “stand up in respect” till the anthem ended. The order said the practice would “instil a feeling within one, a sense of committed patriotism and nationalism.”

In the Delhi Nirbhaya gang rape case, he confirmed death penalty to four convicts describing their action as barbaric and no sympathy is called for to show any leniency to the convicts.