Curfew relaxed in Sirsa for 12 hours after Dera chief's sentencing

A special CBI court on Sunday sentenced Ram Rahim to 20 years in prison after his conviction in two rape cases. 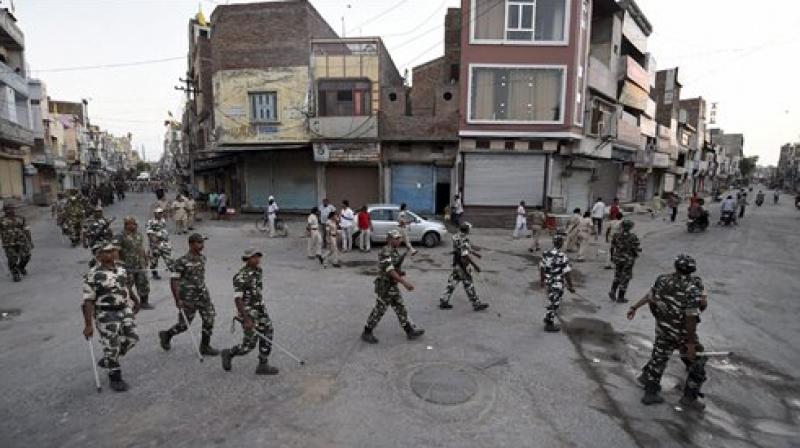 Security forces personnel and police men patrolling the main market in Sirsa after the pronouncement of quantum of sentence for Gurmeet Ram Rahim in the two rape cases on Monday. (Photo: AP)

Sirsa: Authorities in Sirsa, on Monday, relaxed the curfew from 7 am to 7 pm in after the sentencing of Dera Sach Sauda chief Gurmeet Ram Rahim Singh in two rape cases.

The decision was taken after no violent incident was reported in the area. This is the second time since Sunday the curfew has been relaxed, officials said.

Sirsa town is home to the sprawling Dera headquarters where the sect's followers had gathered in large numbers ahead of Ram Rahim's conviction.

"Authorities should lift the curfew permanently in the area as the law and order situation is under control," Bobby Soni, a localite, said.

"During the relaxation of curfew people can buy their household items. Also, schools colleges and other educations institutions will also remain open during the period," Special Commissioner (Civil), V Umashankar said.

Inspector General (Hisar range) A S Dhillon yesterday said there has been no report of violence by Dera followers in the district.

A special CBI court on Sunday sentenced Ram Rahim to 20 years in prison after his conviction in two rape cases.

He said both sentences will run consecutively for a total of 20 years in jail for the flamboyant guru who has millions of followers and counts politicians as well as celebrities as his friends.

The conviction of the Dera head triggered arson and violence across Haryana that claimed 36 lives and injured over 250 people. In Sirsa, four people died and 58 were injured.