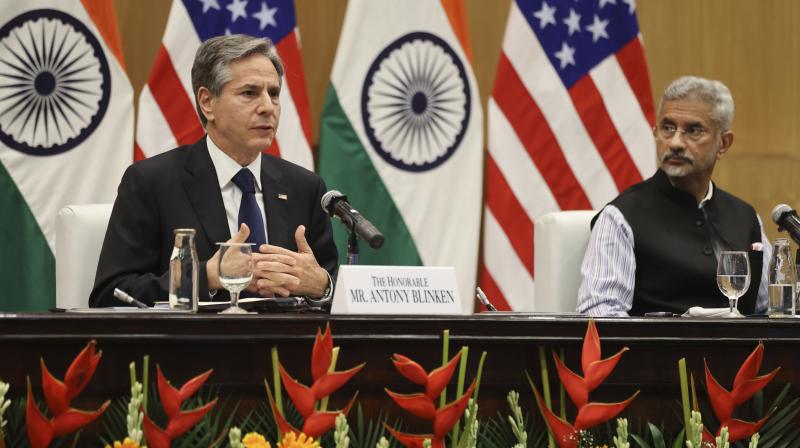 New Delhi: Raising the human rights issue with India, visiting US secretary of state Antony J. Blinken on Wednesday asserted that “all people deserve to have a voice in their government and be treated with respect no matter who they are”, but said at a media briefing later he had discussed these issues in all “humility” with external affairs minister S. Jaishankar, knowing that even American democracy had imperfections and was  a “work in progress” and that “no democracy, no matter how much large or old, has it all figured out”. Pledging to “learn from each other”, Mr Blinken “applauded” Indian democracy and elections as “the largest expression of free political will by citizens anywhere on earth” and a “force for good in a free and open world”.

In a strong response to the US stand at the media briefing in the afternoon after bilateral talks and a “good conversation”, Mr Jaishankar said in a veiled hint at the Citizenship Amendment Act and perhaps even the abrogation of Article 370 of the Constitution that polities had a moral obligation to “right historical wrongs”. Stating that freedom should not be equated with lack of governance, Mr Jaishankar said the quest for a more perfect democracy and union was applicable to not just the US and India but all democracies.

It may be noted that the US has been commenting on various issues in India in the past couple of years, including the situation in Kashmir after the abrogation of Article 370, CAA and even the farmers’ protests that rocked the country early this year.

Mr Jaishankar said: “We had a good conversation about a number of issues ... I made three important points. One, that the quest for a more perfect union applies as much to Indian democracy as much as to the American one, indeed to all democracies. Two, it is the moral obligation of all polities to really right wrongs when they have been done including historically. Many of the decisions and policies you have seen in the last few years fall in that category. And third, freedoms are important. We all value them but never equate freedom with non-governance or lack of governance or poor governance. They are two completely different things.”

Earlier in the day, ahead of his talks with Mr Jaishankar, Mr Blinken said in the wake of a global “democratic recession”, it was vital that both the United States and India as the “two world leading democracies, continue to stand together” in support of democratic freedoms. Speaking at a “civil society roundtable” discussion in New Delhi on “Advancing Equitable, Inclusive, and Sustainable Growth and Development”, the US secretary of state described both the Indian and American democracies as “works in progress” which both nations “talk about” with each other, adding that sometimes the process of strengthening democracy and making its ideals real “is painful, sometimes it’s ugly, but the strength of democracy is to embrace it”.

Speaking at the media briefing later on his discussions, Mr Blinken said: “Our shared ideals were very much part of our conversation today… Our relationship is so strong because it is a relationship between democracies. ... One of the elements that Americans admire most about India is a steadfast commitment of its people to democracy, to pluralism, to human rights, to fundamental freedoms. ... Like our own, India’s democracy is powered by its free-thinking citizens. We applaud that and we view Indian democracy as a force for good in a free and open world. We also recognise that every democracy starting from our own is a work in progress and when we discuss these issues, I certainly do it from a starting point of humility. We have seen the challenges that our own democracy has faced in the past and faces today. But this is common to all democracies. ... We search for a more perfect union. That, by definition, means we are not perfect. Our quest is to get closer and closer to the ideals that we set for ourselves.”

The secretary of state added: “The most remarkable democratic elections in the world in many ways are here in India, just by sheer numbers. It’s the largest expression of free political will by citizens anywhere on earth. As friends, we talk to each other about these issues. We talk about challenges we are both facing in renewing and strengthening our democracies and I think humbly we can learn from each other, because no democracy, no matter how much large or old, has it all figured out. And we celebrate that the world’s oldest and largest democracies are dedicated at heart to a shared set of values that will ensure the ultimate success of democracy.”

At the roundtable, Mr Blinken said that in the wake of a global “democratic recession”, it was vital both the United States and India as the “two world leading democracies, continue to stand together” in support of democratic freedoms. Hailing Indo-US ties as one of the most important in the world, Mr Blinken said the achievements of democracy in India “includes the free media, independent courts, a vibrant and free and fair electoral system”. “Perhaps most important, we’re connected by shared values, and I believe shared aspirations, that are common to our people.  The Indian people and the American people believe in human dignity, in equality of opportunity, the rule of law, fundamental freedoms, including freedom of religion and belief,” he pointed out, adding that the Indian and American people are “connected in so many different ways -- business ties, university ties, religious and spiritual ties, and of course, millions of family ties”.