Two more drones fired on by Army in Jammu, fly away

The drones were suspected to be flying at a height of 1.2 km and were possibly powered by long range batteries 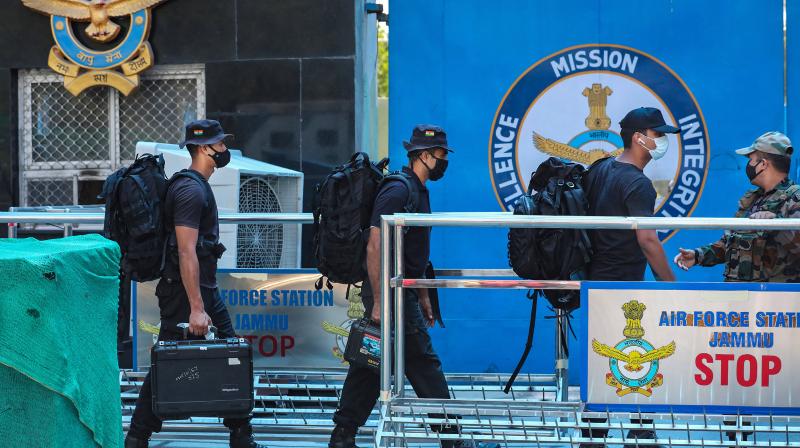 Srinagar: The Army said on Monday that its alert jawans had averted two separate drone activities in the Ratnuchak-Kaluchak belt close to the border with Pakistan in the Jammu region, thereby foiling a possible threat in this extremely sensitive military zone.

This comes a day after two bombs believed to have been dropped by one or two drones rocked the high-security technical area of the Jammu Air Force Station. Two security personnel got minor injuries in these blasts, one of which ripped off the roof of a barracks and the other took place on an open ground on the intervening night of June 26-27.

The Army said on the intervening night of June 27-28 two separate drone activities -- one at 11.45 pm and the second at 2.40 am -- were spotted over the Ratnuchak-Kaluchak military area by alert troops who immediately opened fire at the unmanned aerial vehicles (UAVs) or unmanned aircraft systems (UASes).

Jammu-based defence spokesman Lt. Col. Devender Anand said: “Immediately after the drone activities were noticed, a high alert was sounded and Quick Reaction Teams engaged them (drones), following which both flew away.” He added: “As a result of the alertness and proactive approach of our jawans, a major threat was thwarted in the area. The security forces are on high alert and the search operation is in progress.”

Army sources said its men fired 20-25 rounds at the drones before these “flew back under the cover of darkness”. The drones were suspected to be flying at a height of 1.2 km and were possibly powered by long range batteries. The sources added the security grid was on its toes as 14 drone stories had reportedly been launched from across the Line of Control and the international border with Pakistan lately. The areas where such activity was seen include Jammu, Rajouri, Samba and Kathua in J&K.

The reports said one of the drones was hovering over the brigade HQ of an Army unit located in the Kaluchack garrison.

The probe by the Indian Air Force into the disquieting blasts at its overly sensitive airbase in Jammu, with the incident seen as a major security lapse by the authorities, is now rolling. A National Investigation Agency team had visited the scene on Sunday morning to gather initial evidence and there is a possibility that the NIA, the country’s premier counter-terrorist task force, will be asked to take over the probe.

Sources have told this newspaper that the IAF authorities have conveyed to the government that it is capable enough of probing the incidents and taking it to a logical conclusion on its own. However, some experts feel that taking into consideration the apparent terror aspect of the bombing, whether carried out with drones or as an “act of sabotage from within”, the IAF might need the help and expertise of a reputable probe agency such as the NIA.

The Air Chief, Air Chief Marshal Rakesh Kumar Singh Bhadauria, is likely to visit the Jammu airbase either on Tuesday or Wednesday after he returns from a three-day official visit to Bangladesh for an on-the-spot assessment of the situation arising out of the blasts. Late Sunday, he had telephoned the two IAF personnel injured in the twin blasts, Arvind Singh and S.K. Singh, to enquire about their well-being.

Explaining the NIA team’s visit to the blast site, the sources said that the National Investigation Act 2008 gives the NIA powers to take suo motu cognisance of terror activities in any part of the country and register a case. In 2019, this law was amended to expand the type of offences the agency could investigate and prosecute, including the ones coming under Explosive Substances Act 1908, the sources added. The J&K police has also taken up the investigation into the blasts after an FIR was filed at the Satwari police station of Jammu under the relevant provisions of the Unlawful Activities (Prevention) Act on Sunday.