India   All India  29 Jun 2018  India is facing a water crisis: A long-term plan is needed
India, All India

India is facing a water crisis: A long-term plan is needed

There are many who cannot afford to drink clean water or even take a decent bath. 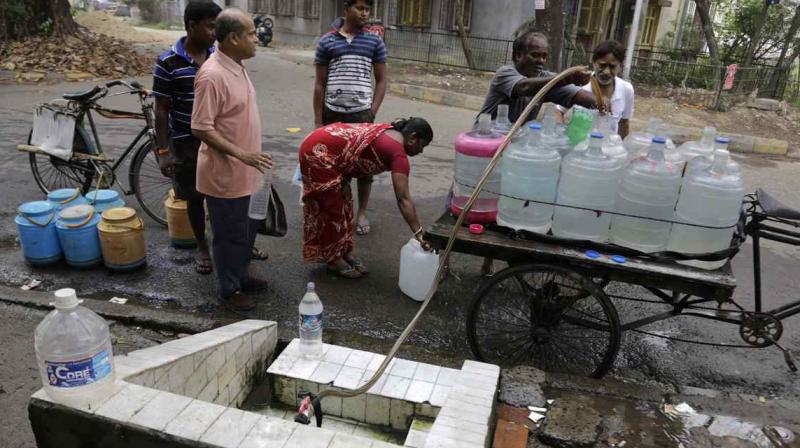 A water vendor and residents of an area take drinking water from a roadside water source in Kolkata. (Photo: AP)

As pregnant rain clouds hang over Delhi, one is reminded of the desperate need for rain in the capital and the NCR region. The slow desertification of the capital and the scarcity of water in India overall, is a matter of concern that has environmental experts with furrowed brows. The local sand storm or aandhi has become even more frequent event in both Delhi and Gurgaon. “The frequency of sand storms has increased in the city in the past one decade. While earlier in 2002, summer sand storms used to occur for four days a week, now, the frequency has increased to multiple spells over the span of two weeks.” This observation by Dr Kushagra Rajendra, head of the department at Amity School of Earth and Environmental Sciences, Manesar, is spot on. Ministers from a certain party would do well to pay heed to these wise words.

However, they seem to be walking in the opposite direction. Recently the announcement that the forest department has cleared axing 16,500 fully grown trees in the heart of South Delhi with more in the waiting, has given all those environmentally conscious denizens a mini stroke. What is the reason for this senseless tree felling? Apparently, the land is needed for Central government accommodations! Concerned citizens began a missed call campaign titled “Save Delhi’s trees”. How it works is that the caller gives three rings and is supposed to hang up and this in turn registers the number of the caller as a form of protest. Youngsters in Gurgaon are also planning a planting drive of rainbow trees for International Pride Day in July. Instead of spending money on balloons, masks and rainbow flags, that are all environment unfriendly and leave a mess, the pride planning committee is discussing planting trees and creating a fertile green belt around Gurgaon’s corporate concrete jungle.

We need to take more steps like this if we want to avert certain disaster. It has been predicted that a new report from the Niti Aayog — a government think tank — says that 21 Indian cities, including Delhi, Bengaluru and Hyderabad, will run out of groundwater by 2020. The water crisis is in fact the worst we will ever face in the history of India.

In other parts of the country, like Bihar, PM Narendra Modi, in his typical fashion of putting the cart before the horse, is pleased as punch. He has been celebrating his “Swachchh Bharat” or the Clean India Mission with several ad campaigns on radio and television. The target of this mission impossible is to make the entire country open-defecation free by October 2, 2019 — initially, with the construction of 12 million toilets. Not only will the Swachchh Bharat campaign miss its deadline, many of these toilets are impossible to maintain and clean with the huge water shortage across the country.

In Dhamtari, Chhattisgarh, reporters from an esteemed daily discovered that out of more than 300 households in Modhi village, roughly 100 did not have a toilet. Some of them had not even received a visit from an official. It appears that the figures spouted by the Bill & Melinda Gates Foundation is in fact erroneous. Besides, without water, these toilets reach a state of being unsanitary and unusable and people are forced to return to defecating out in the open.

As we know, thanks to Akshay Kumar and Bhumi Pednekar’s romcom Toilet: Ek Prem Katha, a toilet is a critical need for each household, lest your wife divorce you! The film has a happy ending with the divorce being averted and the CM agreeing to the construction of toilets in the village. But so many of the toilets constructed are used as storage units. Moreover, in this story there is no water problem in the village. In real life though, the line for water at the village tap supersedes the line for the toilet.

In this scenario one can use what they are calling “grey water” to flush the toilet. We also need storage units for rain and floodwater, which can be used to flush the toilets. I have seen photographs of pigs in rural India invading a public toilet… well that only indicates that a dry bathroom system can and may be developed in certain water-starved areas.

Rainwater can always be used and it’s just a matter of building storage units. One thing is for sure: rainwater harvesting has faced several setbacks. First there is the issue of supply; most of India has not received enough rainfall to restore its groundwater table. The next issue is that the water is often not clean or reliable and often carries water-related illnesses, according to the data released by the One Drop project.

The ATM-like water kiosks that have been built with public money, where you put in `3 and you can fill your bottle with RO water, rarely work. After spending so much money on building and installing these kiosks, the least the government can do is to make sure that they work! Thirsty folks line up outside the Noida City Centre station and are often left disgruntled and the UP government is just looking on passively as these water kiosks cost a bomb to install. It will be better that the Jal Board takes over the project since they have had better success with mobile tankers.

Inadvertently, most draughts are man-made. Vast deforestation, reclaiming water bodies, over population of cities and poor maintenance of infrastructure have resulted in a massive shortage of water across our country. And while big water companies may be melting the ice caps to bring you “crystal clean water from the Himalayas”, there are many who cannot afford to drink clean water or even take a decent bath. We need a dedicated afforestation programme, and a commitment of a long-term plan to avert the impending water crisis that hangs over our heads.