Odisha: Row as homeguards made to kneel down

Four homeguards, including a woman, were made to kneel down in front of the district homeguard office at Baripada. 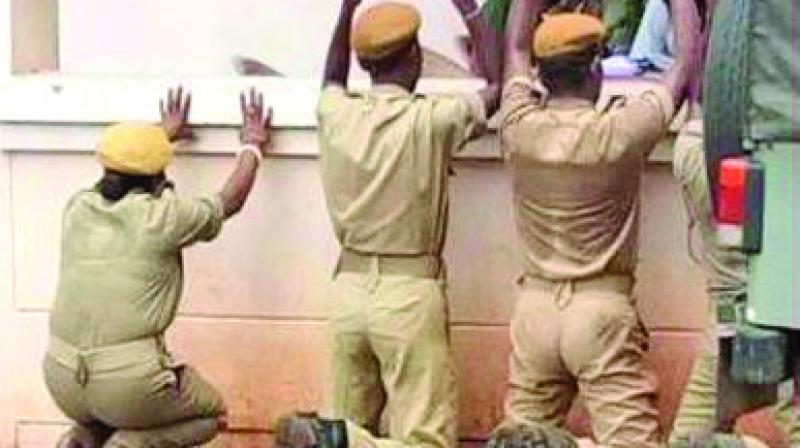 A picture that went viral on social media shows four homeguards kneeling down in front of the district office at Baripada in Odisha.

Bhubaneswar: After a photograph showing four home guards kneeling down at Baripada went viral on social media, Odisha Commandant General (CG) of Homeguards Binoy Kumar Behera sought a report on Wednesday from the Mayurbhanj superintendent of police and the Commandant of Home Guards regarding the circumstances under which the security personnel were punished in that manner.

“I have sought a report from Mayurbhanj superintendent of police (SP) and Commandant of Homeguard on the matter. We will take action after we get the report,” Commandant General Behera said.

Four homeguards, including a woman, were made to kneel down in front of the district homeguard office at Baripada by reserve inspector Ashok Kumar Sethi on June 25 for flouting the dresscode and not wearing the proper uniform on duty.

These homeguards were on Rath Yatra duty at Baripada, the district headquarters of Mayurbhanj district, and were found without proper uniform during inspection.

Following the detection, Mr Sethi made them kneel down for two minutes in front of the homeguard office as disciplinary action.

“They are provided with uniforms, shoes, cap everything by the government. But, they are not using them properly. They are not wearing the uniform during duty hours. It’s expected of them to follow the dresscode. They were found wearing civilian dress over their uniforms while on duty on that day. We are being rebuked by our senior officers for their lapses. Despite having pointed it out repeatedly to them, they were not abiding by it. Two to three of them were given punishment for two to three minutes,” Mr Sethi said.

The incident came to light after the image went viral on social media.