Kumar will launch her campaign from the Sabarmati Ashram in Ahmedabad on June 30th. 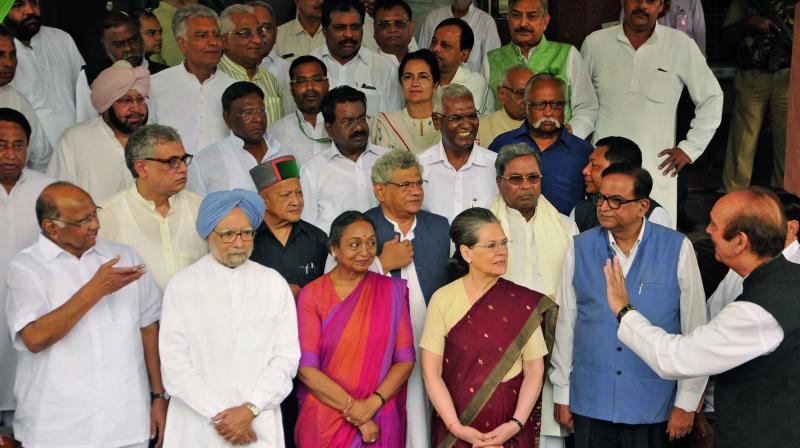 New Delhi: The Opposition bloc’s presidential candidate Meira Kumar on Wednesday filed her nomination in the presence of top Congress and Opposition leaders and said it marked the beginning of her “fight for ideology”. Congress president Sonia Gandhi, who accompanied Ms Kumar, 72, along with former Prime Minister Manmohan Singh, NCP supremo Sharad Pawar, CPI(M) general secretary Sitaram Yechury, CPI’s D Raja, TMC’s Derek O Brien and other opposition leaders, said “For us, it is a battle of ideologies, principles and truth and we will fight it.” Union minister M Venkaiah Naidu, who filed the fourth set of nomination papers on behalf of the NDA’s presidential nominee Ram Nath Kovind minutes before Ms Kumar filed her nomination at the same venue, said there was no ideology invloved as the issue was about the post of President which is a Constitutional post. The senior BJP leader claimed that the NDA presidential nominee was comfortably placed as not just NDA even few non-NDA non-UPA outfits were supporting Mr Kovind.

“We are confident that our nominee, who is widely acceptable to one and all as he is the most suitable candidate, will get elected by a comfortable margin,” Mr Naidu said.

Ms Kumar will launch her campaign from the Sabarmati Ashram in Ahmedabad on June 30th.

Speaking to the media after filing her nomination, Ms Kumar said, “From today, our fight of ideology has started. This ideology is based on democratic values, inclusiveness in society, freedom of the press and individuals, end of poverty, transparency and destruction of caste structure.” The former Lok Sabha Speaker also said that she doesn’t merely believe in talking about this ideology, but in implementing it.

Ms Kumar rubbished suggestions that the Presidential election was a ‘Dalit versus Dalit’ contest. Echoing the same sentiments, Mrs Gandhi said “For us, it is a battle of ideologies, principles and truth and we will fight it.” Congress Vice President Rahul Gandhi, who is abroad visiting his grandmother, tweeted “Against the ideology of divisiveness she represents the values that bind us as a nation and people. Proud to have Meira Kumar ji as our candidate.” CPI(M)’s Sitaram Yechury also said that the presidential poll is not a ‘Dalit versus Dalit’ contest but a fight to safeguard and strengthen the Indian republic. In a Facebook post, Mr Yechury claimed that the fight for the opposition was to safeguard the republic against a candidate who was backed by parties set to “destroy” the republic’s foundations and “our fundamental values.”

Mrs Gandhi and other top Congress and opposition leaders were amongst those who proposed and seconded Ms Kumar’s nomination.

Interestingly, Ms Kumar was unanimously chosen by the opposition parties after the NDA named former Bihar governor and a Dalit leader, Mr Ram Nath Kovind, as its Presidential nominee.

Ms Kumar, who had already appealed to all members of the electoral college, said  “There is one path which takes us towards narrow- mindedness and no concern for the poor and downtrodden, while the other path leads to upliftment of Dalits, poor, oppressed, downtrodden, women and labour and people of all religions...I have urged everyone to hear the voice of their inner conscience and take the country forward.”

As part of her campaign, Ms Kumar would also visit her home state Bihar on July 6 and will end it on July 15.

The odds are heavily stacked against the Opposition’s nominee, especially with non-NDA outfits including AIADMK, BJD, YSRCP, TRS and the JD(U), which was earlier part of the opposition bloc, supporting the NDA candidate.