Notably, a 16-year-old Junaid Khan was lynched on a moving train in Haryana by a mob on allegation that he was ‘carrying beef’. 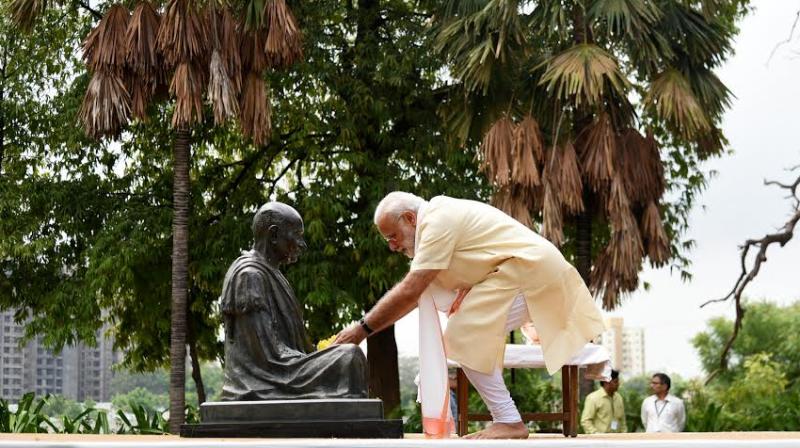 Ahmedabad: Speaking on the occasion of the centenary celebrations of Sabarmati Ashram in Ahmedabad, Prime Minister Narendra Modi on Thursday broke his silence on the recent lynching incidents saying that "killing people in the name of Gau Bhakti is not acceptable."

"This is not something Mahatma Gandhi would have approved of," he said.

The Prime Minister's remarks come hours after people across the country took to streets to protest against the recent killings and seven days after the Ballabgarh incident where a teenager was lynched on a moving train.

#WATCH PM Modi says, 'Killing people in the name of Gau Bhakti is not acceptable. This is not something Mahatma Gandhi would approve of.'. pic.twitter.com/43caDXmGzt

Releasing a special postal stamp and commemorative coin to mark 150th birth anniversary of Shrimad Rajchandra, he said that thoughts of Mahatma Gandhi have the power to mitigate challenges the world is facing today.

"No one spoke about protecting cows more than Mahatma Gandhi and Acharya Vinoba Bhave. Yes. It should be done," Modi said.

"No person in this nation has the right to take the law in his or her own hands in this country," PM Modi warned after a series of lynching incidents that shook the nation.

He also stressed that violence never has and never will solve any problem.

Concluding his speech, Prime Minister Narendra Modi urged the people to work together and create the India of Mahatma Gandhi's dreams, an India which will make freedom fighters proud.

Notably, a 16-year-old Junaid Khan was lynched on a moving train in Haryana by a mob on allegation that he was ‘carrying beef’.

The country saw another social-media spurred sea of protests condemning the several lynching incidents of the recent past on Thursday, calling the event ‘Not In My Name.’

Here is a list of some of the lynching incidents that took place in the recent past: