India   All India  29 May 2018  Pak peace signals as it’s getting isolated: Sushma Swaraj
India, All India

Sushma dismissed the Congress’ contention that there was a flip-flop by the government on its Pakistan policy. 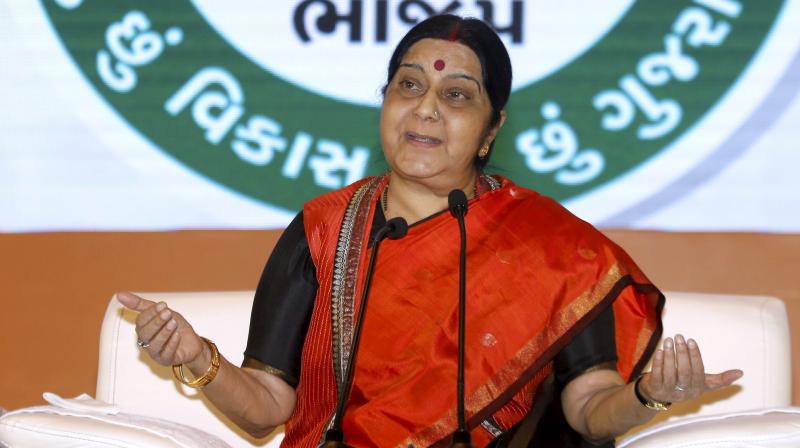 New Delhi: Pakistan stands isolated on the issue of terrorism in the world today and that is why it is sending signals that it wants to talk to India, external affairs minister Sushma Swaraj said on Monday, adding that this was a success of India’s foreign policy. She also reiterated that “talks and terror cannot go together” and there can’t be a dialogue with Pakistan when there are deaths in border firings. On the national security advisers of the two nations meeting in Bangkok a few months back, she said talks on terror could however be held.

“Why does Pakistan want to talk to India? Pakistan has been isolated in the international community due to terrorism. This is a success of Indian foreign policy,” Ms Swaraj said.

On the issue of talks, she said: “There is no change in our stand. We are ready for talks but there is a caveat. Talks and terror cannot go together. This has nothing to do with elections. Pakistan has to stop terrorism (from its soil). When there are deaths on the border, the sounds of dialogue do not sound nice.”

On the NSAs of the two countries meeting a few months ago in Bangkok, Ms Swaraj said: “Talks and terror can’t go together. But talks on terror can be held.”

Addressing a press conference to mark four years of the NDA government, Ms Swaraj said it had achieved “unprecedented outreach and unparalleled outcomes” in foreign policy in the past four years. She dismissed the Congress’ contention that there was a flip-flop by the government on its Pakistan policy.

The minister also lashed out at the Congress for trying to ridicule her about being left only with a Twitter handle in her ministry, saying Twitter had brought her ministry close to the people unlike the UPA government’s days. Drawing attention to how many people had got instant help from the MEA because of Twitter, she said the Congress would understand its benefits only if any of their (Congress leaders’) relatives were stuck abroad in a difficult situation.

Dismissing allegations that India had ceded ground to China in Doklam, Ms Swaraj said there had been no change in the status quo at the site (on Bhutanese soil) when Indian and Chinese armies had a more than two month-long standoff last year. She also said the Congress was “obsessed” with Doklam, saying India had resolved the standoff with China using diplomacy. Praising the outcomes of the recent informal summit at Wuhan between Prime Minister Narendra Modi and Chinese

President Xi Jinping, she said it had contributed to more understanding and trust between the two countries. Ms Swaraj also said both leaders had told the other that they could call each other directly if they wanted to discuss any issue at any time.

The minister also noted that in the NDA government’s current tenure, India had gained membership of three out of four export control regimes. Ms Swaraj also said at the ministerial level, India had reached out to 186 out of 192 nations so far in the past four years.