India   All India  29 May 2018  All eyes on Kairana as BJP takes on united Opposition
India, All India

All eyes on Kairana as BJP takes on united Opposition

The results of all the byelections would be announced on May 31. 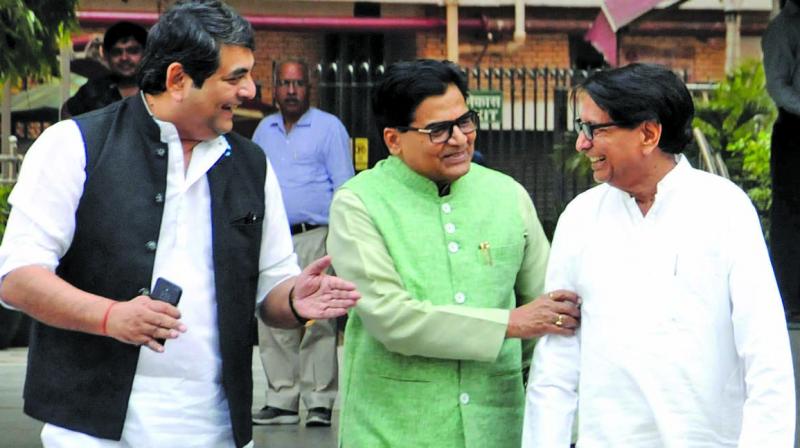 Congress leader R.P.N. Singh (from left), SP leader Ram Gopal Yadav and RLD chief Ajit Singh leave after a meeting with the Election Commission at Nirvachan Sadan in New Delhi over the reports of malfunctioning of the EVMs. (Photo: G.N. Jha)

New Delhi: The crucial Lok Sabha seat of Kairana in western Uttar Pradesh saw over 54 per cent polling in the byelection held on Monday amid complaints of electronic voting machines (EVMs) malfunctioning even as voting was overall peaceful in the Jat-dominated region.

Apart from Kairana, byelections were held in three other Lok Sabha seats — Bhandara-Gondiya and Palghar in Maharashtra and the lone seat of Nagaland.

Byelections were also held in 10 Assembly seats — Noorpur in Uttar Pradesh, Shahkot in Punjab, Jokihat in Bihar, Gomia and Silli in Jharkhand, Chengannur in Kerala, Palus Kadegaon in Maharashtra, Ampati in Meghalaya, Tharali in Uttarakhand and Maheshtala in West Bengal. The results of all the byelections would be announced on May 31.

Large-scale reports of EVMs malfunctioning in Kairana and Bhandara-Gondiya were also reported by the leaders of all parties. The Election Commission later in the day assured that repolling would be held wherever necessary.

The EC said reports of “large-scale” failure of EVMs were an “exaggerated projection of reality” even as complaints mounted about problems with electronic voting machines, including in Kairana. EC sources blamed the inept handling of the paper-trail machines for votes by the ground staff, specially when the temperature was running high, for malfunctioning in some areas.

All eyes were, however, on Kairana where the BJP is facing the combined might of the Opposition. The polls were necessitated for this seat after the death of BJP MP Hukum Singh earlier this year, and the party fielded his daughter Mriganka Singh. Her main rival is Tabassum Hasan, the candidate of Ajit Singh’s Rashtriya Lok Dal, who is being supported by the Congress, Samajwadi Party and the Bahujan Samaj Party (BSP).

The BJP is keen to retain the seat specially in the aftermath of the drubbing it had got earlier this year in the bypolls held in two other Lok Sabha seats Gorakhpur and Phulpur, the seats held by chief minister Yogi Adityanath and deputy chief minister Keshav Prasad Maurya respectively. It had lost both the seats to the Samajwadi Party.

Through its aggressive campaigning in Kairana, the BJP wants to convey the message that the twin defeats were an aberration. The late BJP MP, Hukum Singh, had in 2016 alleged that several Hindu families had left Kairana owing to the domination of people of a particular community. He had even sought a census count of the Hindu families leaving the region.

Also under focus are the two Lok Sabha constituencies of Maharashtra. The Shiv Sena has fielded late BJP MP Chintaman Wanaga’s son Shriniwas Wanaga in Palghar, a decision which has not gone down well with the BJP, which has nominated Congress deserter Rajendra Gavit as its candidate.

In Bhandara-Gondiya, there is a direct contest between the BJP and Nationalist Congress Party (NCP). The BJP fielded Hemant Patle, a former MLA, while the NCP has fielded Madhukar Kukde. Mr Kukde is a joint candidate of the Congress, NCP, RPI and Piripa alliance.

The byelection was necessitated in Gondiya after the sitting BJP MP, Nana Patole, had resigned from the seat.

In Karnataka, tight security and a changed political equation following the Congress-JD(S) alliance marked voting for the Rajarajeshwarinagar election, which was deferred earlier due to the seizure of 9,564 Election Photo Identity Cards (EPIC) from an apartment during the recent Karnataka Assembly elections.

Even while voting was under way, the Opposition parties and the ruling BJP moved the EC in New Delhi claiming that “hundreds” of EVMs and paper trail machines deployed for the Kairana and Noorpur bypolls in UP had developed snags and were not replaced for hours. EC sources said that failure on part of the ground staff had led to heating of the machines. They alleged that officials who had skipped training programmes and “spent time on their phones during training” had placed the machines at places where “heat sensitive” nature of the device had created problems.