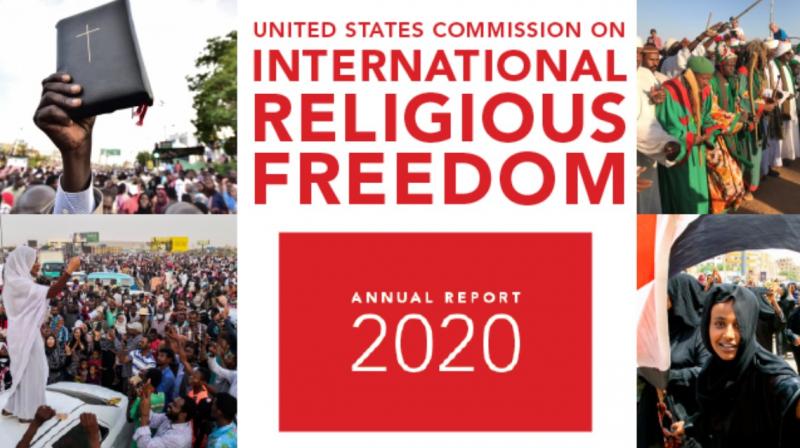 The cover of the USCIRF's annual report on religious freedom.

New Delhi: The United States Commission on International Religious Freedom (USCIRF) has singled out India in its Annual Report for 2020, saying there has been a “sharp downward turn” and “deterioration” in religious freedom in India. It recommended to the US State Department that India be designated as a “Country of Particular Concern (CPC)” along with a few others.

A furious India hit back in the same language, saying it rejected the “biased” report and that New Delhi in turn regards the USCIRF as an “Organisation of Particular Concern”.

The USCIRF calls itself an “independent, bipartisan US federal government entity that monitors, analyses, and reports on threats to religious freedom”. It recommends but does not set policy, and there is virtually no chance the State Department will follow its lead on India.

In remarks on India while releasing its report on Tuesday, USCIRF said it had “documented significant developments during 2019, including … a sharp downward turn in India, and making recommendations to enhance the U.S. government’s promotion of freedom of religion or belief abroad in 2020”.

It said the Indian government was among those governments  that engage in or tolerate “systematic, ongoing, egregious violations” of religious freedom.

The commission said Narendra Modi's Hindu nationalist government "allowed violence against minorities and their houses of worship to continue with impunity, and also engaged in and tolerated hate speech and incitement to violence."

It pointed to comments by home minister Amit Shah, who once referred to mostly Muslim migrants as "termites," and to a citizenship law that has triggered nationwide protests.

It also highlighted the revocation of the autonomy of Kashmir, which was India's only Muslim-majority state, and allegations that Delhi police turned a blind eye to mobs who attacked Muslim neighborhoods in February this year.

New Delhi hit back, saying, “We reject the observations on India in the USCIRF Annual Report. Its biased and tendentious comments against India are not new. But on this occasion, its misrepresentation has reached new levels. It has not been able to carry its own commissioners in its endeavour. We regard it as an organisation of particular concern and will treat it accordingly.”

The USCIRF meanwhile said, “In the 2020 Annual Report, the USCIRF recommends 14 countries to the State Department for designation as “countries of particular concern” (CPCs) because their governments engage in or tolerate “systematic, ongoing, egregious violations.”

India has taken on the USCIRF twice already in the recent past. Earlier this month, while emphasising that “no segregation is being done in civil hospitals on the basis of religion, as clarified by the Gujarat Government”, India had in mid-April accused the USCIRF of “spreading misguided reports”, adding it “must stop adding religious colour to our national goal of fighting the pandemic and distract from larger efforts”.

On the basis of some media reports, the USCIRF had then tweeted that it is “concerned with reports of Hindu and Muslim patients separated into separate hospital wards in Gujarat” and that “such actions only help to further increase ongoing stigmatisation of Muslims in India and exacerbate false rumours of Muslims spreading Covid19”.

The USCIRF has earlier this year also been critical of the Indian Government over the riots in north-eastern Delhi in February but New Delhi had hit back then as well, saying, the USCIRF comments were “factually inaccurate and misleading, and appear to be aimed at politicising the issue”.