Bhatnagar will have a tenure of little less than three-years as he is scheduled to retire in December, 2019. 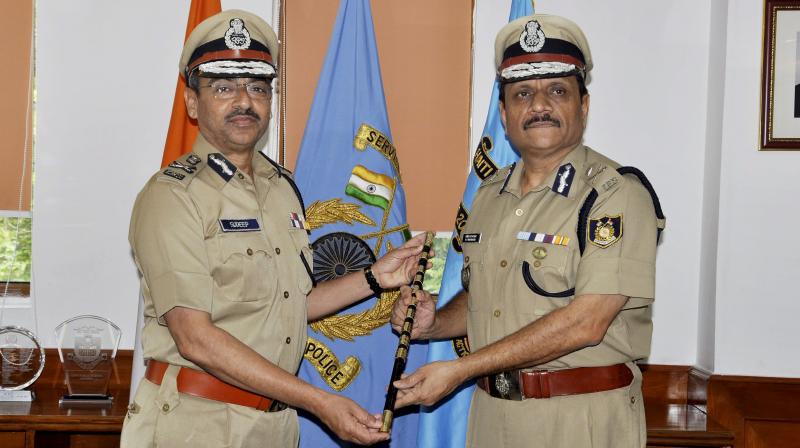 R.R. Bhatnagar (R) takes over the charge as the new Director General of CRPF in New Delhi. (Photo: PTI)

New Delhi: Days after the Central Reserve Police Force (CRPF) lost 25 of its men in a deadly Naxal ambush in Chhattisgarh, a full-time director-general took charge of the paramilitary force on Friday.

Senior IPS officer R.R. Bhatnagar, 57, reached the CRPF headquarters at Lodhi Road and took charge after he was accorded the ceremonial guard of honour. The government had issued orders for appointing Mr Bhatnagar, a 1983-batch IPS officer of the Uttar Pradesh cadre, as the new full-time DG of the force on April 26.

The post had been lying vacant for close to two months since K. Durga Prasad retired on February 28. Mr Bhatnagar was till now serving as the chief of Narcotics Control Bureau.

The new chief was handed over charge by the acting CRPF DG Sudeep Lakhtakia. Mr Bhatnagar will have a tenure of little less than three-years as he is scheduled to retire in December, 2019.

Immediately after assuming charge, Mr Bhatnagar held a meeting with senior officials on the recent Naxal attacks in Chhattisgarh. While 25 CRPF personnel were killed in Sukma earlier this week, 12 were eliminated in a Naxal ambush in the same region on March 11. The Union home ministry has already directed CRPF to launch a massive offensive against the top leadership of Naxals.

In addition to the Maoist, Mr Bhatnagar as head of the country largest paramilitary force will also have to deal with security challenges in the Kashmir Valley where CRPF is being targeted by stone-pelters.

Even senior CRPF officials admitted that both Naxal and Kashmir violence remain the biggest challenge for the security force in addition to performing routine law and order duties in different parts of the country.