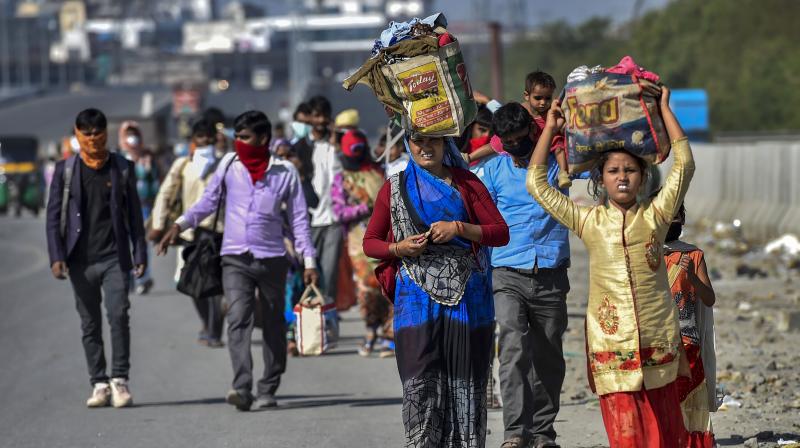 A group of migrants walk to their villages amid a nationwide lockdown in the wake of coronavirus pandemic, near Delhi-UP Border in New Delhi. PTI image

New Delhi: The Centre on Sunday asked state governments and Union Territory administrations to effectively seal state and district borders to stop the movement of migrant workers, who will be put in 14-days quarantine at destinations for violating the lockdown.

During a video conference with chief secretaries and DGPs, Cabinet Secretary Rajiv Gauba and Union Home Secretary Ajay Bhalla asked them to ensure that there is no movement of people across cities or on highways as the lockdown continues.

"There has been movement of migrant workers in some parts of the country. Directions were issued that district and state borders should be effectively sealed," an official statement said.

States were directed to ensure that there is no movement of people across cities or on highways and there should be strict implementation of the lockdown.

Only the movement of goods should be allowed.

Those who have violated the lockdown and travelled during the period of lockdown will be subject to minimum 14 days of quarantine in government quarantine facilities, the statement said.

Later, at a press conference, Joint Secretary in the Ministry of Home Affairs Punya Salila Srivastava said those migrant workers who have violated the lockdown and travelled during the curb will be put in 14 days quarantine at their destinations.

"We have asked the States to make arrangements for shelters so that the migrant workers who have violated the lockdown and travelled could be put in quarantined for 14 days at their destinations. Health workers are being prepared for this," Srivastava said at a press conference here.

In an order issued on Sunday, the home ministry said, "The migrant people, who have moved out to reach their home states/ home towns, must be kept in the nearest shelter by the respective State/Union Territory government quarantine facilities after proper screening for a minimum period of 14 days as per standard health protocol".

In the official statement, the government said District Magistrates and SPs should be made personally responsible for the implementation of these directions.

The two top central government officials told the chiefs of police and civil administrations of all states to make adequate arrangements for food and shelter for the poor and needy people, including migrant labourers, be made at the place of their work.

The Cabinet secretary and home ministry officials are in constant touch with the State chief secretaries and the DGPs.

Video conferences were held by the Cabinet Secretary and the Home secretary on Saturday evening as well as Sunday morning with the chief secretaries and the DGPs.

"It was noted that, by and large, there has been effective implementation of the lockdown guidelines across all States and UTs. Essential supplies have also been maintained. Situation is being monitored round the clock and necessary measures are being taken as required," the statement said.

The central government had on Saturday issued orders for the use of State Disaster Response Force (SDRF) funds for this purpose.

Sufficient funds are available with states in this head, it said.

States have been also told to ensure timely payment of wages to labourers at their place of work during the period of lockdown without any cut.

House rent should not be demanded from the labourers for this period. Action should be taken against those who are asking labourers or students to vacate the premises, the statement said.

Detailed instructions on monitoring of such persons during quarantine have been issued to the states.

It was impressed upon all the states that three weeks of strict enforcement is essential to contain the spread of coronavirus. This is in the interest of everyone, the statement said.

A large number of migrant workers have left their work places in different parts of the country in last few days and walking down to their native places, hundreds of kilometres away facing hardships on the way.

The migrant workers have no option but to walk as there is no transport available after the announcement of the nationwide lockdown by Prime Minister Narendra Modi on Tuesday in a bid to combat the coronavirus outbreak.

Seeing their plight, some state governments have made arrangements for their transport, accommodation and food of late.