Though intially the barbs against the BJP leadership were cotton wrapped, off late they had acquired the well known Shotgun wit. 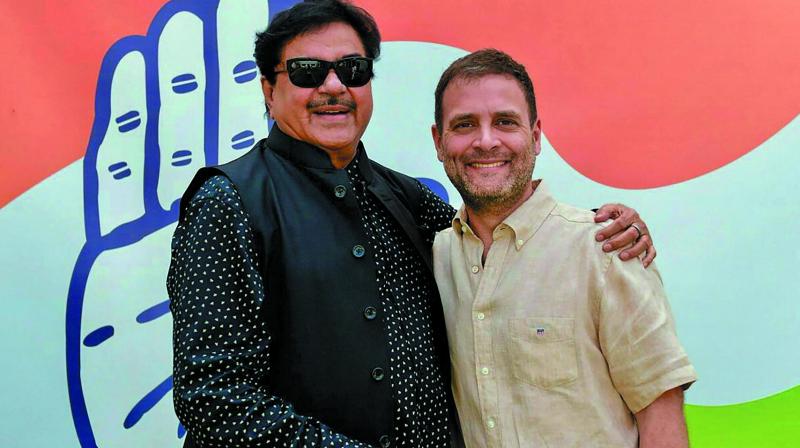 New Delhi: Not the one to hold back punches — both verbal as well as physical, the “Bihari babu” of Hindi cinema, popularly known as “Shotgun Sinha” for his quick repartee and gift of the gab, well known actor and politician Shatrughan Sinha will formally join the Congress on April 6, the auspicious day of Navaratri.

Mr Sinha, who has been associated with the BJP since almost 30 years, had met Congress president Rahul Gandhi on Thursday and was suppose to officially announce his association with the party, but later decided to do so on the April 6, which marks the beginning of the nine-days long Navaratri celebrations.

"Painfully....on the way out of BJP....But hopefully in the best direction under the dynamic leadership of my dear friend Lalu Yadav and the desirable, most talked about leader from the Nehru Gandhi family... the true family of nation builders..,” he tweeted on Thursday evening with a photograph of his him shaking hands with Mr Gandhi.

A close associate of BJP patriarch L K Advani, Mr Sinha had been openly critical of the party's various decisions and actions for the last three years.

When the BJP left out Mr Advani and another party veteran Mr Murli Manohar Joshi from its list of contestants for the 2019 Lok Sabha polls, Mr Sinha did not mince his words.

"For a man of the standing & stature of Shri. L.K.Advani & for other veterans like Shri Murli Manohar Joshi & Shri Shanta Kumar also...totally humiliating! It has hurt the entire nation. People are aghast at this action," he had tweeted.

The veteran actor, who was a two-time Rajya Sabha MP from the BJP between 1996 and 2008, before he fought and won from Patna Sahib Lok Sabha seat twice in 2009 and in 2014 on the party's ticket, is keen to contest from there again.

There is a likelihood that if the script goes according to his liking, then Mr Sinha may contest on a Congress ticket against union minister Ravishankar Prasad, whom the BJP has given the ticket from Patna Sahib, in place of the rebel actor.

Though intially the barbs against the BJP leadership were cotton wrapped, off late they had acquired the well known Shotgun wit.

Sample some of these: "Party in MP, Rajasthan, Maharashtra...& in most of your alliances too. By the way Sir, what happened to your promise of #CongressMuktBharat? Also gone with the wind like 'Smart Cities' & other promises?! Don't worry Sir, it's now right time for #CongressYuktBharat Jai Hind!," Mr Sinha had tweeted earlier this month, directly addressing Prime Minister Narendra Modi.

Also he had earlier tweeted, "fulfill some or all your promises and reduce the gap between the promises & performances."