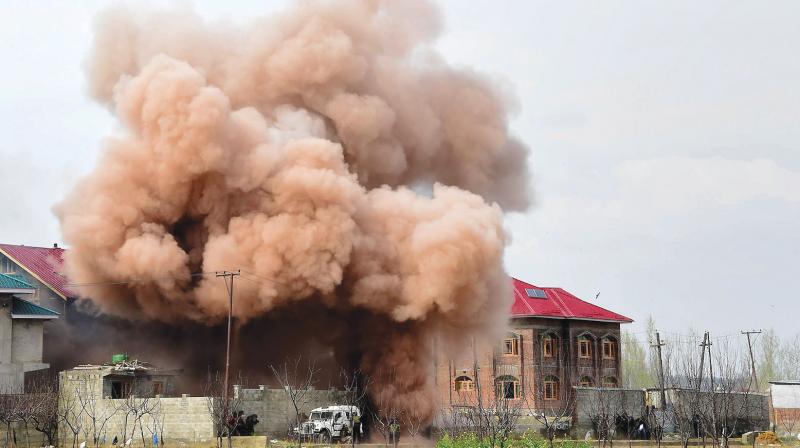 Smoke rises from the site of an encounter between militants and the security forces at Chadoora in Jammu and Kashmir’s Budgam district. (Photo: H.U. Naqash)

Srinagar: Tensions have heightened in Kashmir after three civilians were killed and 16 others injured in security forces’ action against stone-pelting crowds near the site of an encounter at Chadoora in Budgam district on Tuesday.

While the encounter and clashes were on, chief minister Mehbooba Mufti said that it was highly painful to see young boys lose their lives, and appealed to local militants to shun violence and return to mainstream “as nothing can be achieved through violence and gun.”

An alliance of key separatist leaders has called for a one-day strike in Kashmir on Wednesday to mourn and protest the civilian killings.

Witnesses and hospital sources said that Ganaie and Butt were hit by bullets as security forces fired live ammunition to disperse surging crowds chanting slogans and hurling stones at them in their attempt to help the lone militant to escape. They were shifted to hospital where they died.

Six other youth injured in shotgun pellet firing and teargas shelling were brought to Srinagar for specialisd treatment. However, Ahmed succumbed at the city’s government-run Sri Maharaja Hari Singh Hospital.

The militant, identified as Tauseef Ahmed Magray of Kulgam district, was killed and a paratrooper was injured in the encounter, which lasted for nearly ten hours.

Police sources said that security forces fired mortars and also used explosives to blow up a private house to “neutralize” the heavily-armed holed up militant who had earlier made an abortive attempt to flee. “The body of the terrorist along with a weapon has been recovered,” said defence spokesman Colonel Rajesh Kalia.

The encounter started on Tuesday morning hours after the members of J&K police’s counterinsurgency Special Operations Group (SOG), troops from the Army’s 53 Rashtriya Rifles and the CRPF had overnight laid siege to Durbugh village of Chadoora, about 25-km west of Srinagar, to flush out the militant from the newly built 3-storey private house. The operation was launched following specific inputs about the presence of a militant involved in a number of militancy-related incidents.

Police and Army sources said that the militant targeted security forces with a barrage of gunfire. Security forces returned fire, triggering the encounter.

Unofficial reports talked about the presence of more than one militant in the house and said that the other may have fled the area during night.