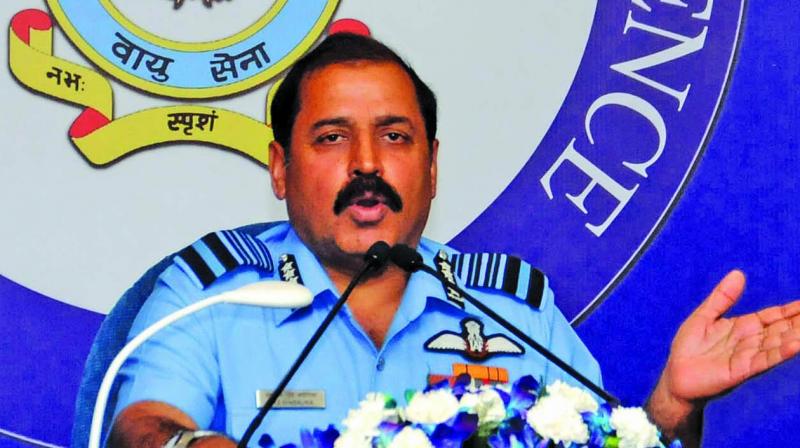 New Delhi: Indian Air Force (IAF) Chief R.K.S. Bhadauria said on Friday that the crucial lesson from Balakot air strike and air skirmishes after that is, India should not allow weapon edge over Pakistan to “slip back” once it is achieved with the induction of Rafale fighter jets and other weapon upgradation including indigenous missiles.

“It (weapon edge) did not materialised at the time of Balakot and it will soon materialise with the induction of Rafale,” said Air Force chief. He said that Indian Air Force had an edge over Pakistan Air Force in terms of Beyond Visual Range Missile capability at the time of Kargil. “We allowed that to slip and thereafter it took a decade and half in our struggle to acquire similar or better capabilities,” he said.

Air Chief Marshal Bhadauria said that the takeaways from the Balakot air strike is it is important to have weapon and technology edge in air engagement, especially in a deeply-contested area. “But weapon edge is very important,” he said. He said that once we get back this edge, it is important that in our lifetime we do not allow it to slip back.

Pakistan Air Force F16s, which had come to target Indian military installations on 27 February 2019 were armed with the Beyond Visual Range (BVR) missile AMRAAM which has higher range than that of the R-77 on IAF’s Su 30 MKI.

However, 36 Rafale fighter jets which India has purchased (first four will land on May 2020) come with Meteor air-to-air missiles that have a range of 150 kilometres.

Presently, Pakistan Air Force (PAF) does not have missiles to counter Meteor missiles.

Air Chief Marshal Bhadauria said that Balakot air strike showed there exists a space below the conventional conflict boundaries, where IAF can be utilised for targeting, yet have controlled escalation.

Meanwhile, defence minister Rajnath Singh said surgical strike of 2016 and Balakot airstrikes of 2019 were not just military strikes but a strong message to the adversary that terror infrastructure across the border cannot be used as safe haven to wage low-cost war against India. He said India’s out-of-the-box response reflected in the Balakot airstrikes forced the rewriting of many doctrines across the LoC and the adversary has to think 100 times for any future misadventures. He said that the responses displayed India’s defence capability and affirmed its right to defend itself against terrorism.

“Our approach to terrorism was and will remain a judicious combination of clinical military action and mature and responsible diplomatic outreach,” said defence minister.

“We have recently seen the impact of collective diplomatic and financial pressure on Pakistan. Terrorists like Hafiz Saeed who were treated like VIPs and heroes, have been put behind bars. We realise that this is not enough and unless Pakistan is made accountable, it will continue with its previous policy of duplicity and deceit. All attempts are being made to work in this direction,” added Mr Singh.