India   All India  29 Feb 2020  AASU threatens to intensify CAA stir after board exams
India, All India

If insiders are to be believed, there are two divergent views in the students’ body on floating a new political party. 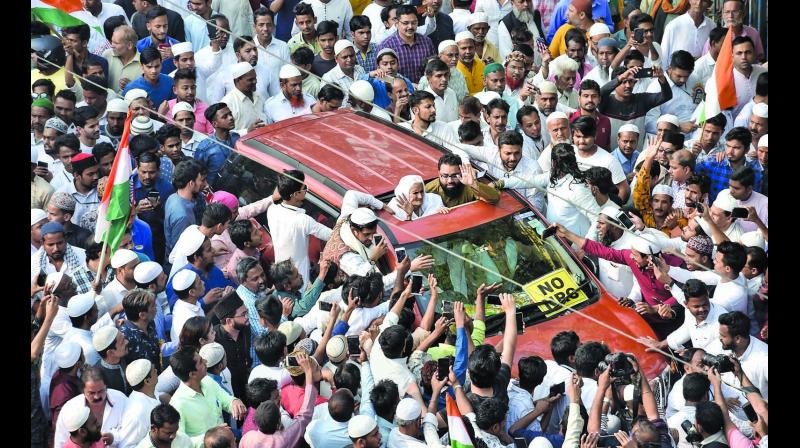 Protestors during a protest rally against CAA, NPR and NRC, in Kolkata on Friday. (Photo: PTI)

Guwahati: The powerful All Assam Students Union on Friday decided to intensify the ongoing agitation against the Citizenship (Amendment) Act once the ongoing class X and XII board examinations are over in mid-March.

Informing that decision was taken in central executive body meeting of the AASU, which was held on Thursday night at Gauhati University, the Aasu leader said that the much talked about plan of the organisation to float a political party to take on BJP in the 2021 assembly polls did not come up for discussion in the executive committee meeting.

Indicating that issue of forming the political party may be raised in the delegate meeting of the student body which started on Friday, sources in the students body said, “Without taking the view of the AASU delegates from all over the state, it’s difficult to reach a conclusion on floating a political party out of the anti-CAA movement. The demands of the people of various parts of the state will be raised by the AASU delegates. The top brass of the party will first listen to them and in the next central executive meeting of AASU, they may deliberate on the issue of floating the new political party.”

If insiders are to be believed, there are two divergent views in the students’ body on floating a new political party and preparing a new political alternative as ruling BJP and regional AGP and BPF refused to join the anti-CAA movement.

Asserting that the anti-CAA protests are being ‘carefully steered’ so that they do not hamper the ongoing board examinations, the AASU leadership also regretted that there have been attempts to create division among the anti-CAA leaders and ruling BJP left no stone unturned to defame them.

AASU general secretary Lurinjyoti Gogoi told reporter that the actual need is for leaders, not political parties, who will not compromise with the issues of the state. He asserted that the protests against the CAA will continue till it is repealed.

“Our issues are very different from the people of other states. Our regionalism is much more important than anything else and parties in Delhi need to understand this clearly. We need to protect our culture, identity, regionalism and language,” he added.

Mr Gogoi who was at the forefront of floating the idea of launching new political party said, “More than a political party there is need of  leaders who will never compromise with Assam’s interest or let the state down at any cost. We need people who can raise their voices against the forces in Delhi. The Centre is trying to impose things on us. They are imposing Acts or introducing new rules, which we do not even need.”