Speaking in Hindi, Mr Modi said the Congress had “made a fool” of the people through its loan waiver promises. 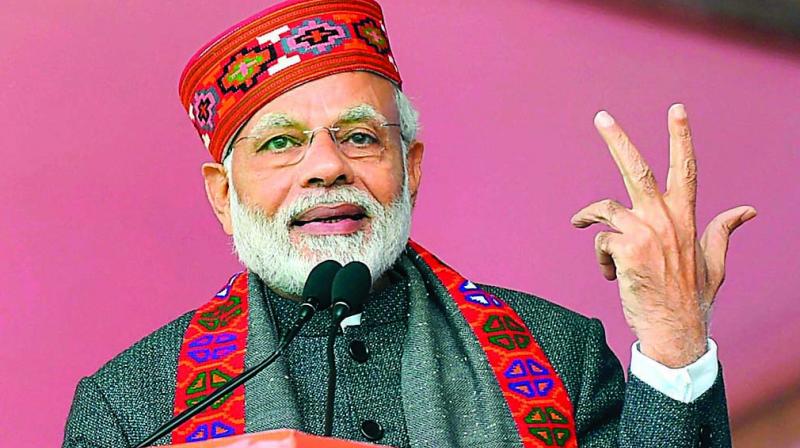 New Delhi/Dharamsala: Days after Congress announced farm loan waivers in three states, Prime Minister Narendra Modi on Thursday accused the Congress of fooling and misleading farmers on the issue of loans, saying governments led by the Opposition party had not fulfilled their promises in the past.

Addressing a rally at Dharamsala in Himachal Pradesh to mark one year of the Jai Ram Thakur-led BJP government, the Prime Minister said that the Congress government that came to power in 2009 waived loans worth only `60,000 crore after the party had “promised” to write off an amount of “6 lakh crore”.

He added that a report of the Comptroller and Auditor General had found that lakhs of people who were not even farmers benefitted from the then Congress government’s loan waiver scheme.

Speaking in Hindi, Mr Modi said the Congress had “made a fool” of the people through its loan waiver promises.

The Prime Minister’s criticism of the Congress over loan waivers comes days after Rahul Gandhi said his party will not let Mr Modi rest till the Centre writes off farm loans across the country. The recently elected Congress governments in the states of Rajasthan, Madhya Pradesh and Chhattisgarh have already waived off loans of farmers. Apparently countering Mr Gandhi’s attacks over the Rafale jet deal that the “watchman” had himself turned into a “thief”, Mr Modi said, “Chowkidar choro ko chhorne ko tayar nahi (The watchman is not ready to let scamsters go).”

“Those who were in the habit of looting, they are now feeling afraid of the country’s ‘chowkidar’ and are now abusing him,” Mr Modi said.

Reaching out to ex-soldiers, the Prime Minister claimed that just like the lies on farm loan waiver the previous Congress government had misled ex-soldiers on the implementation of their demand for “one rank, one pension”.

The previous Manmohan Singh-led Congress government had misled the nation by allocating a meagre budget for the one rank, one pension scheme, he said.

“Ït was our government at the Centre implemented ‘one rank, one pension’ scheme in the real sense,” he said. “

The Prime Minister also added that scams totalling `90,000 crore, involving bogus beneficiaries of pension schemes run by the previous government, were unearthed after the BJP came to power at the Centre.