Former Prime Minister Manmohan Singh evaded comments when he was asked about the trailer of the movie based on him. 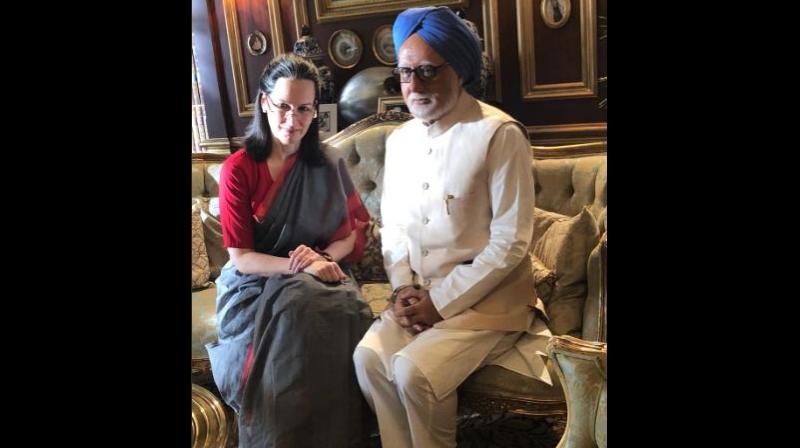 Maharashtra Youth Congress has written to producers of 'The Accidental Prime Minister' asking for a special screening before the launch on January 11. (Photo: Twitter Screengrab/ @TAPMofficial)

Mumbai: Soon after the trailer of the biopic ‘The Accidental Prime Minister’ based on former prime minister Manmohan Singh’s years in office was released, it has created a furore in the political fraternity.

On Thursday, the Congress demanded special screening of the movie as they wanted to ensure that none of the scenes is factually incorrect.

Maharashtra Youth Congress president Satyajeet Tambe Patil has written to the producers asking for a special screening before the launch on January 11.

Patil said from the trailer it appears that "facts have been played with and presented in incorrect manner with regards to the ex-prime minister Manmohan Singh, UPA chairperson Sonia Gandhi and Congress party to malign the image of the party which is not acceptable to us."

Warning of 'other options to stop the screening across India' the statement further said that "if the said movie is released without prior screening for our office bearers and without making necessary changes recommended by us, it will be understood that you are doing this deliberately".

On Friday, when ex-PM was asked about the trailer of the movie based on him, Manmohan Singh evaded comments.

Asked by journalists to comment on the movie at the Congress' foundation day function at the party headquarters on Friday, Manmohan Singh walked away without saying anything.

Congress leaders quipped that the Anupam Kher-starrer ‘The Accidental Prime Minister’ based on the book by Sanjaya Baru-- Manmohan Singh's media advisor between 2004 and 2008 is BJP's propaganda against their party.

Congress leader and Rajasthan Chief Minister Ashok Gehlot said propaganda against the Congress and its leaders would not work and the truth shall prevail.

His colleague, Congress leader P L Punia, accused the BJP of evading answers on its “mis-governance” after having failed on all fronts.

“This is the handiwork of the BJP. They know that time has come to give answers after completion of five years and they are now trying to divert attention by raising such issues and evade answering to the public after its government failed on all fronts,” he said.

The trailer was well received by the ruling BJP, which tweeted the clip along with praises. In its official Twitter account, the BJP also posted review of the trailer where it said, “Riveting tale of how a family held the country to ransom for 10 long years. Was Dr Singh just a regent who was holding on to the PM's chair till the time heir was ready? Watch the official trailer of The Accidental Prime Minister, based on an insider's account, releasing on 11 Jan!”

Riveting tale of how a family held the country to ransom for 10 long years. Was Dr Singh just a regent who was holding on to the PM’s chair till the time heir was ready? Watch the official trailer of #TheAccidentalPrimeMinister, based on an insider’s account, releasing on 11 Jan! pic.twitter.com/ToliKa8xaH

Responding to the BJP, Congress chief spokesperson Randeep Surjewala took to Twitter and said, “such fake propaganda” by the party would not stop it from asking the Modi government questions on “rural distress, rampant unemployment, demonetisation disaster, flawed GST, failed Modinomics, all pervading corruption”.

Meanwhile, protagonist Anupam Kher, who is essaying the role of Manmohan Singh said, “Don’t anticipate the film, the film has been made, so many things are happening in the country, this will happen too.”

The trailer shows Manmohan Singh as a victim of the Congress' internal politics ahead of the 2014 general elections.

Veteran actor Anupam Kher is seen portraying the 86-year-old who ruled the country for a decade until the Congress was voted out of power in 2014.

The trailer also shows glimpses of difficult episodes in Manmohan Singh’s tenure, mostly internal churnings in the Congress. In one scene, Manmohan Singh is shown as saying he wants to resign. To which, the then Congress president Sonia Gandhi says: "There is one corruption scandal after another. In this situation, how can Rahul (Gandhi) take over?"

National Conference leader Omar Abdullah also tweeted on the trailer of the movie, saying, "Can't wait for when they make The Insensitive Prime Minister. So much worse than being the accidental one."

Abdullah also reacted upon the Maharashtra Congress’ decision of stop thre screening of the movie. “As much as the Congress, it’s branches/off-shoots & other well wishers of Dr Manmohan Singh may find the movie disagreeable, we can’t talk about intolerance & then threaten to stop all screenings. Dr Singh’s record & legacy won’t be the product of one single movie or book,” Abdullah tweeted.

During the trailer launch, when Anupam Kher was asked if the BJP, which lost three state elections recently to the Congress, could use the movie to its advantage in the campaign for the 2019 national election, he said, “If I would have been in politics I would have definitely told them to do so. But I am an actor, they will decide.”

Kher also said that there was nothing wrong in the timing of the film's release.

The movie is directed by Vijay Ratnakar Gutte and the role of Sanjaya Baru is played by Akshaye Khanna.