In Shillong, friends at a time of conflict

The agitation against illegal foreign immigrants in Assam in the 1970s had its echoes in Shillong as well. 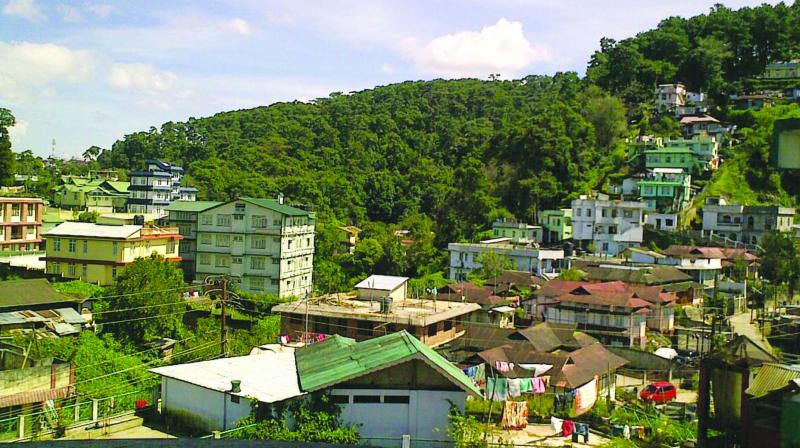 A view of Shillong

The focal theme of the Experience at the India International Centre at the capital this year was the Northeast. It was a three day extravaganza of exposure to the arts, music and dance performances, exhibitions and above all, literature. In a way, as Dr Karan Singh pointed out, it was bringing a glimpse of the rich diversity of a region of which we still do not know much. Participating in a panel discussion among writers from the region, I was asked by one of the speakers about whether I missed Shillong. The question took me back to the four years or so that I spent in the mid-1970s teaching at the North Eastern Hill University. The central university had been set up by an act of Parliament to make higher education in a variety of subjects available to students from the region and recruitment to the faculty was on an all India basis. Its first vice chancellor was Chandran Devanesen, the former principal of the Madras Christian College in Chennai. Devanesen was a well meaning and democratic soul full of love and compassion for the region in which he worked and hoped the university would fulfil the aspirations of the people.

The setting up of the university in Shillong was a crucial decision. Initially, it was hoped the university would be federal in character and not only serve the students of Shillong and Meghalaya but also the adjacent states of Mizoram and Nagaland and in time also the state of Arunachal Pradesh too where college students were affiliated to Punjab University. A few students from Assam too sought enrolment in the new university.

Shillong was a cosmopolitan town. Capital of the composite state of Assam till 1972 when the hill state of Meghalaya came into being, it was a cultural melting pot playing host to a diversity of ethnicities, both tribal and non-tribal. Apart from the native Khasis, Jaintias and Garos, it had Mizos, Nagas, Arunachalis but also significant non-tribal communities like Bengalis, Assamese, Nepalis etc. Many of them had been living and working in Shillong for long.

Shillong provided the best educational and job opportunities in the entire Northeast with some of the best schools and colleges with an excellent medium of instruction in English. There was also a strong central presence in Shillong in the form of all the Surveys which had their offices here, the Anthropological, Zoological, and Geological. It had a military presence too in the form of the Assam Rifles, the BSF and the CRP along with the headquarters of the Eastern Air Command of the Air Force and the Army 101 Area. But Shillong never became a “garrison state” like Kohima or Aizawl where you had the Assam Rifles or other para military organizations breathing down your necks every 100 m or so.

I enjoyed the years I spent in Shillong marked initially by communal harmony and amity and of friendships and relationships forged through mutual respect and understanding. The book Shillong Times by Nilanjan P. Choudhury speaks about friendships amid turbulent times.

Choudhury had spent his “growing up” years in Shillong, his schooling and possibly some college as well. The protagonist is Debu Datta a young Bengali boy who while returning home from school is set upon by some Khasi boys who called him “Dkhar” (foreigner or outsider). A visibly frightened Debu returns home to learn from parents that the Bengalis and other ethnic minority communities are a beleaguered lot as ethnic violence sprang up sporadically ever since the great riots of 1979. I was in Shillong that year and can say that while violence did take place and curfew had to be imposed, it was politically instigated and was nothing that the law and order agencies could not control. The situation was very similar to what happened to the Sikhs in Delhi in 1984 and or what happened in Gujarat in 2002.

Minorities tend to live in distinct ethnic clusters and Shillong was no exception. Bengalis for the most part lived in Laban, Kench’s Trace and Laitumukrah, the Nepalis in Jwalapara , the Marwari businessmen in Jail Road and so on. Debu’s family lived in Upper Jail Road and his father had a pharmaceutical shop in Iewheh, the Khasi name for Bara Bazar. Debu’s father had been born and brought up in Shillong ever since Debu’s grandfather had moved there from what is now Bangladesh.

The agitation against illegal foreign immigrants in Assam in the 1970s had its echoes in Shillong as well. As the agitation in Assam was led by students, the All Assam Students Union (AASU), so was a similar movement mounted in Shillong by the Khasi Students Union (KSU) with one notable exception. There was no large-scale influx of illegal immigrants into Shillong from Bangladesh though Meghalaya shares a common border. But the students were encouraged by vested political interests and the minorities like the Bengalis felt threatened.

Debu’s family in the present times feels threatened as well. Many have to pay “protection” money to feel safe as is true elsewhere. The final straw comes when Debu’s father’s trader license cannot be renewed unless he pays a hefty sum well beyond his means. But the real story is about the friendship forged between Debu and his Khasi friends Clint Eastwood and Audrey Pariat. It’s this relationship that shines through and offers a beacon of hope in troubled times.

The friendship which begins with sharing a bowl of “jadoh” rice with pork forbidden in Debu’s home culminates in a picnic at the sacred groves in Mawphlang in Upper Shillong. Mawphlang was also the place for delectable cherry brandy distilled by a Scot in the early years. The Khasis did adopt interesting names. Clint Eastwood’s father was John Wayne Lyngdoh, obviously a great fan of the actor. In my time, we had “Mighty Sword” Syiem because Syiem’s mother had dreamed about a sword before giving birth or my own colleague in the university “Loving Son” Gassah.

The book has a very filmy ending. Debu decides to appeal to Clint’s father, a local headman, to help save his father’s shop. In the violence that ensues, Clint intervenes to save Debu’s father but is severely injured instead. A contrite father rushes Clint to hospital where Clint’s life is saved. But the damage is done. Debu has to complete his schooling in Kolkata under the care of a draconian aunt.

Clint’s father wants to know why his own son risked his life to save that of Debu’s father, a virtual stranger. A stranger indeed. It’s in that understanding that the future and hope lies. We need to reach out to help our neighbours and strangers in troubled times and resist the mob mentality for acting in a mob ensures anonymity. Also, it’s always the poor and helpless of all communities who suffer in any organised mob violence as the did the poor women “kong” fishmongers of Shillong who could no longer earn a living because of the closure of the markets.