The accused were allegedly planning to jolt the national capital by a series of attacks and serial blasts. 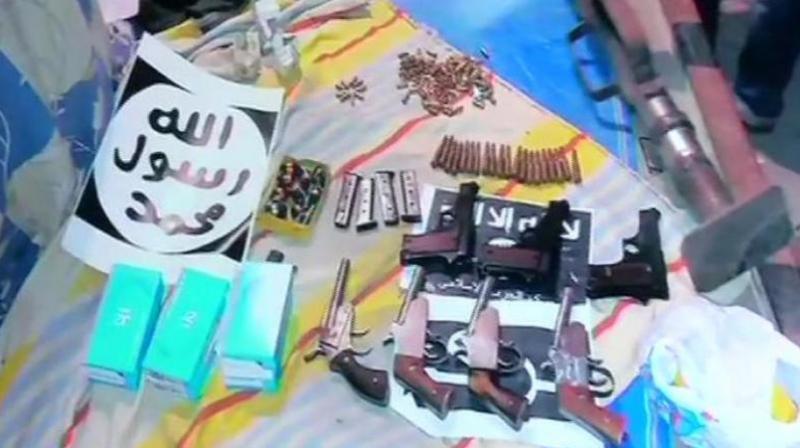 According to NIA, a locally-made rocket launcher, material for suicide vests and 112 alarm clocks to be used as timers were recovered from the searches. (Photo: ANI)

New Delhi: The Patiala House court on Thursday granted 12-day custodial interrogation of 10 people arrested on the suspicion of being members of an ISIS-inspired module to the National Investigation Agency (NIA). The accused were allegedly planning to jolt the national capital by a series of attacks and serial blasts.

On Wednesday, the NIA, in a joint operation with the special cell of the Delhi police and Anti-Terrorism Squad (ATS) of the Uttar Pradesh police, unearthed the ISIS-inspired module ‘Harkat ul Harb e Islam’ after raiding at six places in Jafrabad, Seelampur in Delhi, and 11 places in Uttar Pradesh.

In total, 16 persons were detained out of whom 10 were later arrested — five from Amroha in UP and five from Seelampur and Jafrabad localities in north-east Delhi.

The NIA had sought 15-day custodial interrogation of the accused as the agency claimed there was information that the accused were also planning to target political leaders, members of security forces and others.

The court of additional sessions judge Ajay Pandey carried out in-camera proceedings and permitted the probe agency to quiz the accused for 12 days.

During the hearing, the NIA suggested that there is a possibility of more people being involved in the alleged terror plot. The agency submitted the FIR to the court in a sealed envelope.

Out of 10, the court allowed six suspects to meet their relatives inside the courtroom for five minutes before all of them were sent to police custody.

However, Raq’s family member could not meet him due to lack of original identity proof.

M.S. Khan, the lawyer representing all the accused, told the court that there is no specific information about the conspiracy that has been deposed in front of the court.

The NIA alleged that the group was conspiring and preparing to target places of importance in and around Delhi and Suhail, a resident of Jafrabad in north east Delhi, was instrumental in forming this pro-IS module along with his other associates who have mobilised funds.

‘Harkat ul Harb e Islam’ loosely translates to ‘war for the cause of Islam’. The arrested persons would be produced before the court on January 8.