The two aircraft reportedly came face-to-face barely 40 metres away on airport taxiway but pilots of both planes alerted ATC. 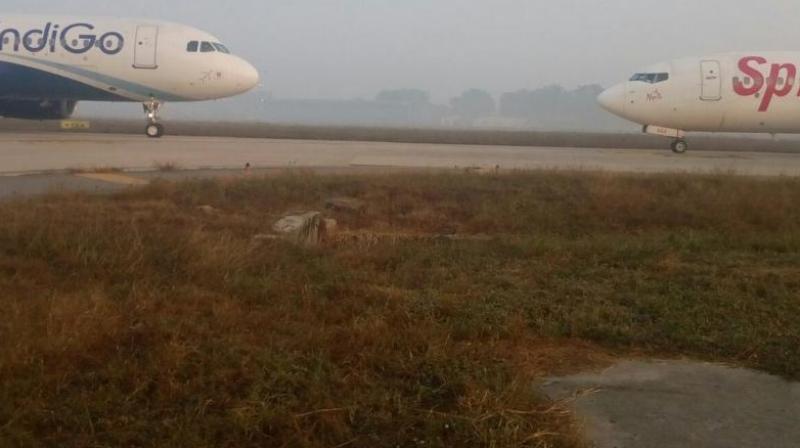 New Delhi: A disaster was averted at the New Delhi IGI airport on Tuesday when two aircraft — one of IndiGo and the other of SpiceJet — came face to face on the same taxiway due to an error of an air traffic controller (ATC) who has now been derostered, sources confirmed. The two aircraft reportedly came face-to-face barely 40 metres away on the airport taxiway but the pilots of both the planes alerted the air traffic control and switched off their engines. However, top government sources said there was no threat of collision since the two aircraft were moving at very slow speed in the taxiway and also because the pilots of the two aircraft had spotted the other aircraft visually and had stopped immediately. Aviation regulator DGCA has ordered a probe.

The SpiceJet aircraft was scheduled to take-off for Hyderabad but sought to return to the parking bay from the taxiway to refuel, with sources saying this was because ATC clearance for takeoff was awaited for about 90 minutes. But ATC sources said that the SpiceJet aircraft did not take off on time due to the low visibility conditions since the runway visual range had dropped to “below minima”. At the same time, the IndiGo flight with 176 passengers on board landed at Delhi from Lucknow. According to sources, the ATC initially asked the IndiGo pilot to “hold on” and not enter the taxiway but later the Air Traffic Controller granted permission for the IndiGo aircraft to enter the same taxiway on which the SpiceJet aircraft was already stationed. Government sources ruled out any pilot error.

In a statement, SpiceJet said, “SpiceJet flight SG 123 operating Delhi-Hyderabad was following ATC instructions at all times at the Delhi airport. While taxiing, the SpiceJet crew observed another aircraft on the same taxiway in the opposite direction. Acting promptly, the SpiceJet crew immediately stopped the aircraft and intimated the ATC. Safety is of utmost and primary concern at SpiceJet. At no stage the safety of passengers, crew and aircraft was compromised. All concerned authorities were immediately informed.” The Hyderabad-bound SpiceJet aircraft was reportedly carrying 187 passengers when the incident took place.

In a statement, IndiGo said, “The IndiGo flight 6E-769 (Lucknow–Delhi) while taxing in at Delhi airport on Tuesday morning, observed another aircraft in front of it. Following the Standard Operating Procedures (SOPs), the caption-in-command took the decision of switching off the engine and reported the incident to ATC. ... All 176 passengers and crew are safe. IndiGo flight was observing ATC instructions all the time at Delhi airport. IndiGo has voluntarily informed the DGCA. This matter is being investigated by the IndiGo safety department and the regulator. As an airline we rely upon the ATC’s traffic advisory and ensure to comply with their instructions.”