Congress demanded that voting time in some polling booths should be extended to compensate for delay. 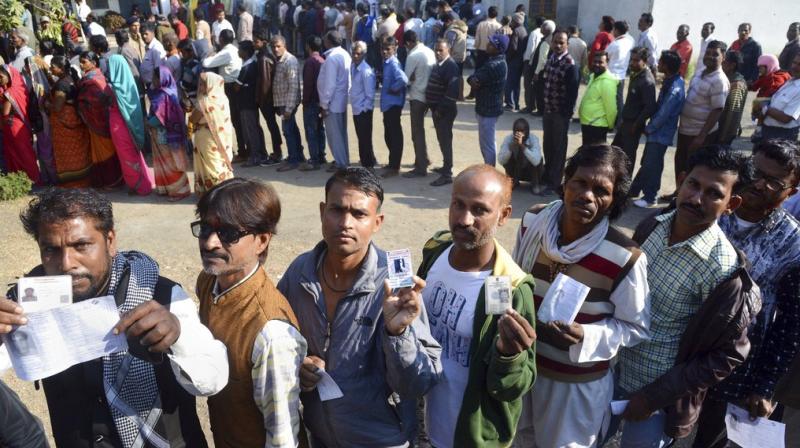 Polling is underway to elect the 230-member assembly, where the ruling BJP and opposition Congress are fighting for supremacy. (Photo: PTI)

Gwalior: The Congress on Wednesday claimed that some EVMs malfunctioned during the ongoing Madhya Pradesh Assembly elections and demanded that polling be extended.

Polling is underway to elect the 230-member assembly, where the ruling BJP and opposition Congress are fighting for supremacy. Voting is being held between 8 am and 5 pm in 227 seats and between 7 am to 3 pm in three Naxal-affected segments.

"There have been several complaints that EVMs at many places malfunctioned. We have written to the Election Commission and demanded that voting time in these polling booths should be extended to compensate for the delay," Congress leader Jyotiraditya Scindia said.

Responding to the demand, CEC O P Rawat said in Delhi that there are provisions for the extension of time and local officers (in Madhya Pradesh) can take the call on the matter.

“There were few complaints on malfunction of some EVMs & VVPAT machines, they’ve been replaced. If it's observed that voters left due to malfunction, we can consider re-polling at that particular polling station,” news agency ANI quoted CEC O P Rawat as saying.

“There are provisions for the extension of time, the local officers can take the call as they see fit. The matter does not need to be handled by the commission,” CEC Rawat added.

The battle of ballots in Madhya Pradesh is just months ahead of the Lok Sabha polls slated in the first half of 2019.

As many as 2,899 candidates, including 1,094 independents, are in the fray. The state has 5.04 crore eligible voters. Altogether 3,00,782 government employees, including 45,904 women, have been deployed on poll duty across the state, where 65,341 polling stations have been set up.