'Kaamdar' vs 'naamdar' this election: PM Modi’s jibe at Rahul in Rajasthan

Hitting out at Congress, PM Modi said those whose four generations have had no connect with public cannot understand pain of common people. 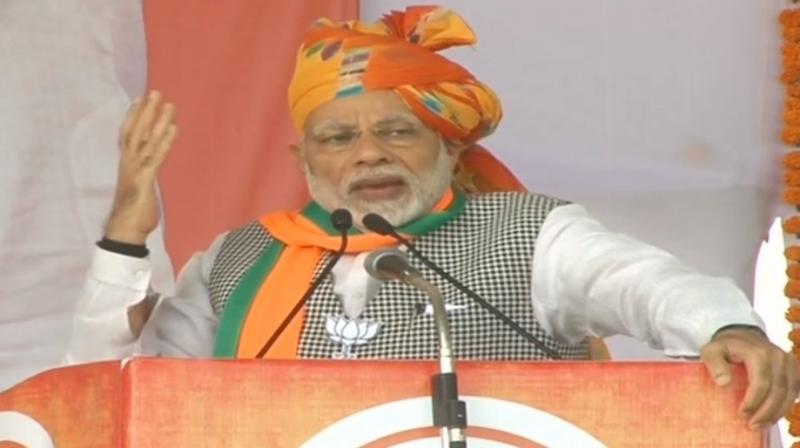 Asking people to elect the Vasundhara Raje government for another term in the state, Prime Minister Narendra Modi said water is a big problem in the desert state. (Photo: Twitter | @BJP4India)

Nagaur (Rajasthan): The kaamdar is in a fight against the naamdar in Rajasthan, Prime Minister Narendra Modi said on Wednesday, making a distinction between the one who works and the dynast, in a jibe against Congress president Rahul Gandhi.

Driving home the difference between himself and the Congress leader, who he has often referred to as naamdar (dynast), he said he was like the people and was not born with a golden spoon.

"We are not seeking votes for our grandsons or granddaughters but for your welfare and to help fulfil your dreams," the Prime Minister said at a rally in Nagaur, Rajasthan, ahead of elections in the state on December 7.

Hitting out at the Congress, he said those whose four generations have had no connect with the public cannot understand the pain of the common people.

"Our only mantra is 'sabka saath, sabka vikas', inspired by social reformist Jyotiba Phule and B R Ambedkar," the Prime Minister said.

Asking people to elect the Vasundhara Raje government for another term in the state, PM Modi said water is a big problem in the desert state.

The Raje government has provided irrigation facilities in 1.5 lakh hectare area, he told the gathering.