India   All India  28 Nov 2018  If Berlin Wall can fall, India-Pak mistrust can also be removed: Harsimrat Badal
India, All India

If Berlin Wall can fall, India-Pak mistrust can also be removed: Harsimrat Badal

India and Pakistan have been so close, but so far for 70 years, Harsimrat Kaur Badal said. 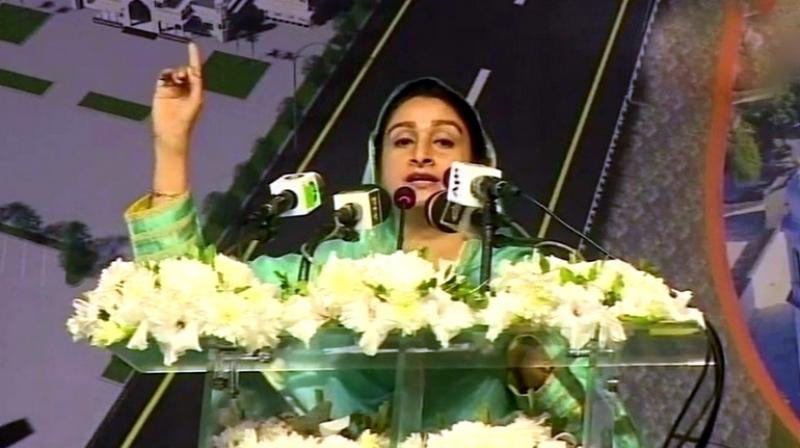 'Today this corridor will bring everyone together ... It will bring joy and peace to both countries,' Union Minister Harsimrat Kaur Badal said. (Photo: ANI)

Kartarpur/New Delhi: The mistrust between India and Pakistan can be removed through revisiting the message of peace and love, Union Minister Harsimrat Kaur Badal said on Wednesday at the foundation stone laying ceremony for a corridor linking Gurdwara Darbar Sahib in Pakistan's Kartarpur to Dera Baba Nanak shrine in India's Gurdaspur district.

Pakistan Prime Minister Imran Khan laid the foundation stone for the corridor to facilitate visa-free movement of Indian Sikh pilgrims from both the sides. Kartarpur Sahib in Pakistan is located across the river Ravi, about four kilometres from the Dera Baba Nanak shrine. It was established by the Sikh Guru in 1522.

The first Gurdwara, Gurdwara Kartarpur Sahib, was built in Kartarpur, where Guru Nanak Dev is said to have died.

India was represented by Union ministers Harsimrat and Hardeep Singh Puri at the event.

"If the Berlin Wall can fall, then the mistrust between two neighbourly countries, India and Pakistan, can also be removed through revisiting the message of peace and love spread by Guru Nanak," Harsimrat said.

"Guru Nanak spent 18 years of his life at Kartarpur and spread his message of peace and love. Today is historic not just for the Sikh community, but for the people and the Governments of India and Pakistan," an emotional Harsimrat said.

"Scores of Sikhs are on this journey for the first time today. I have no friends, no relatives here (in Pakistan). I never thought I would be here," she added.

"When we laid the foundation stone (for the corridor) in Indian Punjab, I saw the corridor becoming a reality there and now I am seeing it here. Today this corridor will bring everyone together ... It will bring joy and peace to both countries. I beseech you ... to issue postage stamps or coins to commemorate Guru Nanak," she said.

India proposed the construction of the corridor to Pakistan nearly 20 years back.

Last week, Pakistan and India announced that they would develop the corridor on their respective side of the border to help Indian pilgrims visit Gurdwara Darbar Sahib in Kartarpur.